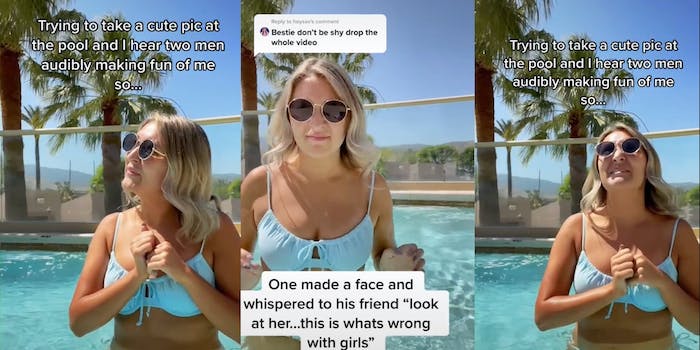 ‘My heart is pounding for her’: TikTok influencer confronts men after catching them ‘making fun’ of her

'Legend says she's still waiting in that pool for next time.'

TikTok is empowering women to be more bold, leading to a recent uptick in videos of women stepping up to confront men. The situations surrounding these viral moments vary, but a recent video of a TikToker confronting a pair of men making fun of her has commenters applauding her gumption.

TikToker @samanthalongton‘s video, which has racked up nearly 10 million views and more than 1 million likes, is quite brief. It shows the young blonde woman standing in a pool at midday, posing in a bikini. Text over the video provides a small amount of background, explaining that Samantha was “trying to get a cute pic at the pool and I hear two men audibly making fun of me.”

Despite Samantha not being “a confrontational gal,” she stood up for herself. The video sees her turning to the men and, in a stunning display of passive confrontation, asking them if they were hoping to have their photos taken by the pool.

“Did you guys want one together?” she asks, customer service smile in full effect. The men sound confused as they ask what she is talking about, a small amount of anxiety clear in their voices. They know they were caught.

“Of course, I can take one for you, do you have your phone?” Samantha asks when one of the men acquiesces. The men, realizing they don’t have their phones—or perhaps merely recognizing that they’ve been had—quietly decline, earning a stunningly condescending “Oh OK then. Next time. Yeah,” from Samantha.

Commenters were caught between applauding Samantha for speaking up and shaking with second-hand adrenaline over the conversation.

Several people noted that they could “feel the adrenaline pumping” through Samantha’s veins in the video.

“Bestie I can feel your heartbeat but sooo glad you did this,” one person wrote.

Meanwhile, women flooded the comments with requests for a sampling of Samantha’s confidence, alongside requests to see the shots she took. Numerous commenters pointed out that the pictures she was taking before the interruption must “be fire,” and demanded a sampling. Samantha obliged via a second video.

The pictures do, in fact, look fire. Samantha is stunning in her bright blue Target bikini, noting that she would “voluntarily get made fun of every day if I knew my pictures would turn out this good.”

Following multiple requests from viewers, Samantha eventually uploaded a more complete version of the confrontation video. The new upload begins long before she starts talking, and captures the moment the men initially walk past and begin mocking her.

As she notes in the video’s text overlay, one of the men “made a face” as he was walking past and told his friend that “this is what’s wrong with girls.” Samantha can be seen reacting to their mockery as the men move over to the pools slide and start “laughing.”

That’s when Samantha had had enough. The confrontation we’ve all come to know and love soon follows, though it takes several attempts from Samantha to get through to the nearby men. When she initially calls out to them, commenters couldn’t help but notice one man’s exhaustingly predictable “what babe” before Samantha put them in their place.

“Its the customer service voice for me,” the top comment reads. “The level of sarcasm yet friendly.”

“Yes girl,” another commenter agreed. “Get that customer service voice out and SCHOOL THEM.”

Some viewers aim to catch a glimpse of Samantha next time they’re in the area, as “legend says she’s still waiting in that pool for next time.”

Viewers are hoping the men walked away from the conversation with a bit more tact, but Samantha seems unconcerned. She went to the pool to get cute shots, and she got just that. Along with a viral video and plenty of props.