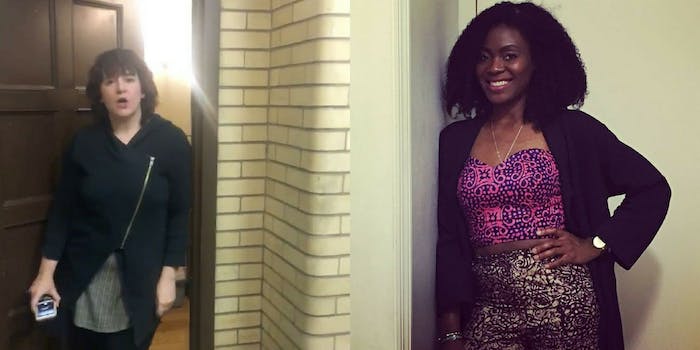 Another day, another white person calling the police on a Black person for no good reason.

In another example of racial profiling of Black people going about their regular business, a white Yale University Ph.D. student called the police on a Black graduate student who was sleeping in a common room in their dorm building.

Lolade Siyonbola, the “sleeping” graduate student, recorded two videos of the ensuing incident and posted them to Facebook early Tuesday morning; together, they have since garnered more than 1 million views.

In the first video, Siyonbola records the Ph.D. student, who she identifies as Sarah Braasch, as she takes photos of Siyonbola. Siyonbola said she was working on a paper in the Hall of Graduate Studies and had fallen asleep in a common room. After Braasch saw her and turned the lights on, she told Siyonbola, “You’re not supposed to be sleeping here. I’m going to call the police.”

Part 1 – Sarah Braasch, Philosophy PhD student, called the cops on my friend a few months ago for getting lost in my building. Today she messed—again—with the wrong one.

In the second video, police attempt to prove that Siyonbola “belongs” in the dorm and is a resident, insisting they check her student ID even after she opens the room to her own dorm to prove she lives there.

Siyonbola expresses that she’s hesitant to give them her ID but ends up doing so, which turns out to be another battle to verify her identity—her name was misspelled in a student database. After the final verification, police tell her she can go about her business.

Part 2 – Sarah Braasch, Philosophy PhD student, called the cops on my friend a few months ago for getting lost in my building. Today she messed—again—with the wrong one.

According to CNN, Yale’s Graduate School of Arts and Sciences Dean Lynn Cooley sent an email to graduate students the following day, saying she is committed to inclusivity and opening up a dialogue about the incident.

“Incidents like that of last night remind us of the continued work needed to make Yale a truly inclusive place,” Cooley wrote. “I am committed to redoubling our efforts to build a supportive community in which all graduate students are empowered in their intellectual pursuits and professional goals within a welcoming environment. An essential part of that effort must be a commitment to mutual respect and an open dialog.”

Siyonbola’s experience follows weeks of headlines of Black people and other people of color having the cops called on them for just existing. Earlier this week, Airbnb guests said they would sue a California police department after a white neighbor called the cops on the guests for thinking they were robbers because the guests didn’t wave at her. Then last week, a Black couple in Texas had the cops called on them for refusing to move from their seats for a white patron. And over the weekend, Black college graduates found themselves being manhandled across the stage at their ceremony for taking a hair longer to walk than other students.

Additionally, Colorado university tour group member also called police on two Native American teens for making her feel “nervous” during the tour by being quiet. And two Black men from Philadelphia settled with Starbucks for a symbolic $1 each after a store manager called the cops on them for waiting for a friend and asking to use the restroom without purchasing anything.

While the Yale police chief didn’t respond to CNN’s request for comment, a spokesperson for the university said the institution believes that responding officers followed procedures.

“Our officers are professionals who take great pride in working for Yale,” she added. “They are trained on unconscious bias, de-escalation techniques, and problem-solving, and seek to treat each individual with respect.”

On Facebook, Siyonbola wrote that she was “grateful for all the love, kind words and prayers. Your support has been overwhelming,”

“Black Yale community is beyond incredible and is taking good care of me. I know this incident is a drop in the bucket of trauma Black folk have endured since Day 1 America, and you all have stories. Share below if you feel led,” Siyonbola continued, opening the dialogue to more than 1,500 comments.