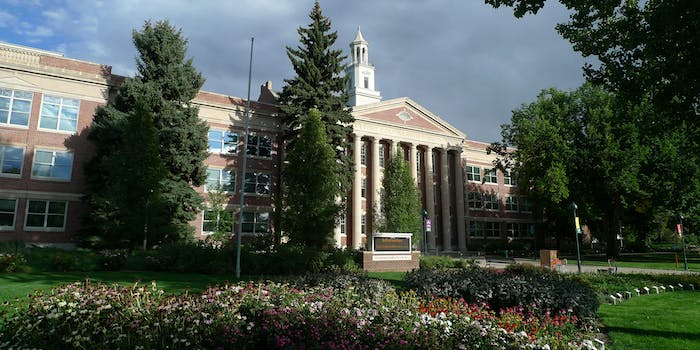 She said the teens 'stood out' among the group.

When two Native American teens recently showed up for their campus tour at Colorado State University, a parent of another prospective student called the police on them because they apparently made her “nervous,” according to CNN.

“This incident is sad and frustrating from nearly every angle, particularly the experience of two students who were here to see if this was a good fit for them as an institution,” school officials told CNN.

Their mother, Lorraine Kahneratokwas Gray, told KOAT the teens saved their own money to take the family’s only car and drive seven hours from New Mexico to Fort Collins, Colorado, to visit their dream school Monday. But when they arrived, the tour had already begun.

“A parent participating in the tour called campus police because she was nervous about the presence of two young men who joined the tour while it was in progress,” the school said.

In the 911 call archived on the school’s website, the concerned mother can be heard telling the police that she was suspicious of the two boys because they didn’t want to tell her their names, “lied” when she asked what they wanted to study, and they “really stood out” among other students on the tour.

“Like their clothing has dark stuff on it, dark things… just weird symbolism or wording on it and one of them has his left hand in his oversized sweatshirt the entire time,” the woman said. After describing where the tour was on campus she said, “And it’s probably nothing. I’m probably completely paranoid with just everything that’s happened.”

Officers responded and pulled the young men aside while the tour continued on ahead without them. The university released the body cam footage from the officers who responded which shows the teens explaining that they arrived late to the tour. By the time police confirmed the brothers were part of the tour, the tour had already moved on.

Fort Collins was home for Cheyenne-Arapaho Native Americans until 1878, when all remaining Native Americans were required to move reservations, according to Fort Collins History Connection. Prior to their removal, Arapahos living in the area had befriended white ranchers who founded Camp Collins. These folks were unable to follow their previous subsistence methods since the local wildlife had been reduced by overall population pressures, so when Camp Collins was eventually closed in 1867, the Arapaho were homeless and destitute.

Out of the 32,000 students who attend Colorado State University, 0.6 percent have American Indian or Alaskan native ancestry, according to Forbes. Around 71 percent of the students are white, 9.9 percent are Black, and 9.9 percent are Hispanic.

In a statement sent to the student body, the university’s president said prospective students who feel uncomfortable with a “diverse and inclusive environment” probably don’t belong at the school.

“Two young men, through no fault of their own, wound up frightened and humiliated because another campus visitor was concerned about their clothes and overall demeanor, which appears to have simply been shyness,” Dr. Tony Frank said. “The very idea that someone—anyone—might ‘look’ like they don’t belong on a CSU Admissions tour is anathema. People of all races, gender identities, orientations, cultures, religions, heritages, and appearances belong here.”

The incident is the latest example of racial profiling that’s omnipresent in the U.S. In just the past few days, two Black men were arrested for sitting in a Starbucks in Philadelphia; a golf club called the police on a group of Black women for playing slowly; and a restaurant came under fire when it asked a Black couple to leave when they wouldn’t give up their table to a white woman.