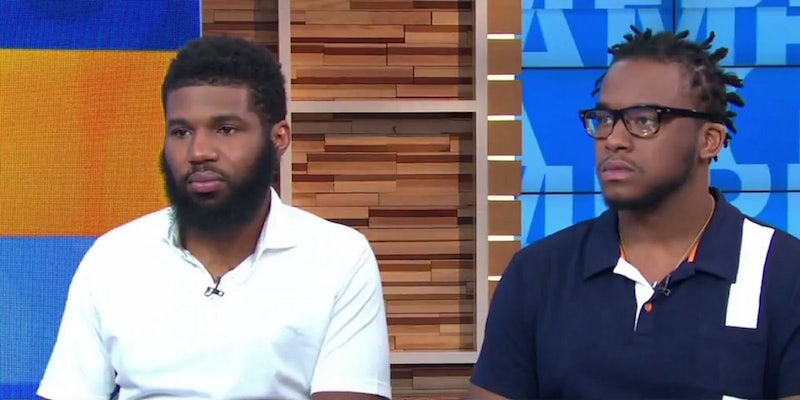 'I want to make sure that this situation doesn't happen again.'

The two Black men who were arrested at a Philadelphia Starbucks last Thursday have now spoken out about the incident that many have argued is a common form of racial targeting by police.

On Good Morning America on Thursday, Rashon Nelson and Donte Robinson said that manager Holly Hylton approached them while they were waiting for a business meeting; this was shortly after Nelson was turned away from using the bathroom. Hylton asked if the men needed drinks, which the two refused, as they already had water.

But approximately two minutes after Nelson and Robinson came in, a call to 911 was placed by Hylton, claiming that both men were “refusing to make a purchase.” The two men insist they were never asked to leave by staff, yet police immediately demanded that they walk out of the store.

“As soon as they approached us, they just said we have to leave,” Nelson told Good Morning America. “There was no question of ‘Was there a problem here between you guys and the manager? What happened?”‘

Robinson also claimed police did not immediately read either men their rights nor explain why they were being arrested. Nelson and Robinson were simply handcuffed, arrested, and brought to a squad car.

“I was just trying to process the situation to myself at the time because I’m thinking about my family that I have, my community,” Robinson explained. “So, in that moment, I’m trying to process what’s going on because it didn’t really hit me what was going on, that it was real, until I’m being double-locked and my hands are behind my back.”

Both men want their arrest, which has since sparked national outrage, to serve as a “stepping stone” to fight back against both racism’s long legacy in the U.S. and discriminatory policing throughout the country.

“I want to make sure that this situation doesn’t happen again,” Robinson explained on the talk show. “What I want is for a young man, young men, to not be traumatized by this and instead motivated, inspired.”