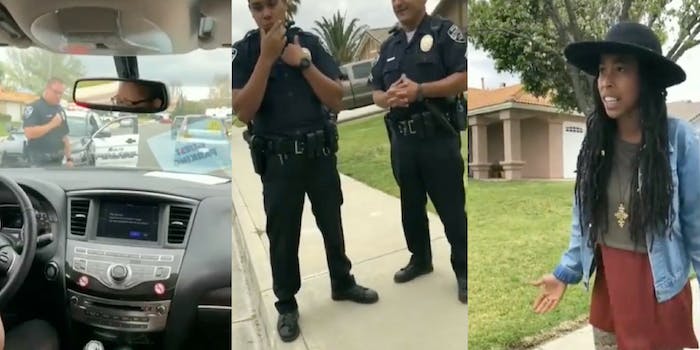 Airbnb is standing by its guests.

A group of filmmakers, three of the four of them Black, were detained by police and surrounded by a helicopter while leaving a California Airbnb where they were guests.

The police later told the filmmakers that the woman who called the police was a neighbor who watched them take their luggage out to the car before checking out and thought they were robbing the place. More specifically, the neighbor thought this because the guests didn’t wave to her as she watched them.

According to photos and video of the incident shared by director and writer Kells Fyffe-Marshall, the group was leaving their Rialto, California, Airbnb on April 30 around 11am when they found themselves surrounded by seven cop cars. Police later told them they were being tracked by a helicopter, as well.

“They locked down the neighborhood and had us standing in the street,” Fyffe-Marshall wrote on the Facebook post with her video.

The issue escalated after the police sergeant arrived at the scene. According to Fyffe-Marshall, he said he didn’t know about Airbnb, the short-term home rental company launched in 2008, and accused the group of lying and pressed them to prove their rental agreement.

After the group showed police booking confirmations and called the landlord, police still detained them for 45 minutes while investigating for a felony charge because they didn’t know what the landlord looked like, Fyffe-Marshall said.

“We have been dealing with different emotions and you want to laugh about this but it’s not funny. The trauma is real. I’ve been angry, frustrated and sad. This is insanity,” she wrote.

Fyffe-Marshall and her group’s story follows weeks of police being wrongly called on Black people for being in public. Last week, a Black couple in Texas had the cops called on them for refusing to move from their seats for a white patron to sit in their place. A Colorado university tour group member also called police on two Native American teens for being quiet and making her feel “nervous” during the tour. Two Black men from Philadelphia just settled with Starbucks for a symbolic $1 each after a store manager called the cops on them for waiting for a friend and asking to use the restroom without purchasing anything.

Airbnb has previously had issues with hosts not permitting Black guests to stay in their homes by canceling reservations, and app users have shared their stories with the hashtag #AirbnbWhileBlack. The racist incidents led to an offshoot of short-term rental apps that host homes welcoming of Black guests and a commitment from Airbnb to end discrimination on the service.

In a statement to Rawstory, Airbnb said it stands with Fyffe-Marshall and that it’s reaching out to partners to discuss the matter.

“Airbnb’s mission is to create a world where anyone can belong anywhere and we have aggressively worked to fight bias and discrimination in society. We encourage anyone in similar situations to contact us,” the statement read.

Watch the video from the filmmakers below:

STORY TIME: During our time in Cali we have been staying at an Airbnb. The 30th was our second morning and at about 11am we checked out. The four of us packed our bags, locked up the house and left. As you can see 3 of us were Black. About 10 seconds later we were surrounded by 7 cop cars. The officers came out of their cars demanding us to put our hands in the air. They informed us that there was also a helicopter tracking us. They locked down the neighborhood and had us standing in the street. Why? A neighbour across the street saw 3 black people packing luggage into their car and assumed we were stealing from the house. She then called the police. At first we joked about the misunderstanding and took photos and videos along the way. About 20 minutes into this misunderstanding it escalated almost instantly. Their Sergeant arrived… he explained they didn’t know what Airbnb was. He insisted that we were lying about it and said we had to prove it. We showed them the booking confirmations and phoned the landlord… because they didn’t know what she looked like on the other end to confirm it was her.. they detained us – because they were investigating a felony charge – for 45 minutes while they figured it out. We have been dealing with different emotions and you want to laugh about this but it’s not funny. The trauma is real. I've been angry, fustrated and sad. I was later detained at the airport. This is insanity.The cops admit that the woman’s reason for calling the police was because we didn’t WAVE to her as she looked at us putting our luggage into our car from her lawn. #wedidntwave #arighttoberight #racialprofiling privilege #rightourstories #therevolution #whenyoupulloverfilmmakers @directedbykells@iamdonisha @komiolaf @ahutchphoto Nisha Rebel Ashlee Hutchinson

Posted by Kells Fyffe-Marshall on Tuesday, May 1, 2018

Update 12:56pm CT, May 9: According to the Associated Press, Rialto police have released body camera footage taken when they were called to the home where four Airbnb guests were checking out but were suspected of carrying out a robbery. The police released the footage to refute claims that they mistreated the group of filmmakers.

With the release of the footage, police said officers were “polite” during the interaction. They also said it’s standard to use a helicopter to monitor a residential burglary in the case that someone leaves prior to officers reaching the home.

“We didn’t detain anybody, we didn’t put anyone in handcuffs, we didn’t point any weapons at anybody,” Rialto police Lt. Dean Hardin said. “We actually allowed them pretty free movement about the scene, so it’s a pretty mild response to a situation.”

The guests said they’re planning to sue police over what they said was a racially-motivated 911 call, KABC reported. One of the women, Donisha Prendergast, who is a granddaughter of Bob Marley, said she was racially profiled. Police say they were prompted by the call from the neighbor living next to the rented Airbnb house.

“I wasn’t being nosy, I was just being observant,” the woman who called had told police. Police said there has been a rise in property crime in that area, and that he appreciated the neighbor’s alert.

At a press conference, the homeowner of the rented Airbnb property put the onus on the guests to have “used some common courtesy” that could have avoided the situation in the first place.

“If the kids had simply smiled at (my neighbor) and waved back and acknowledged her and said, ‘We’re just Airbnb guests checking out,’ none of this would have ever happened,” the owner said. “But instead, they were rude, unkind, not polite.”