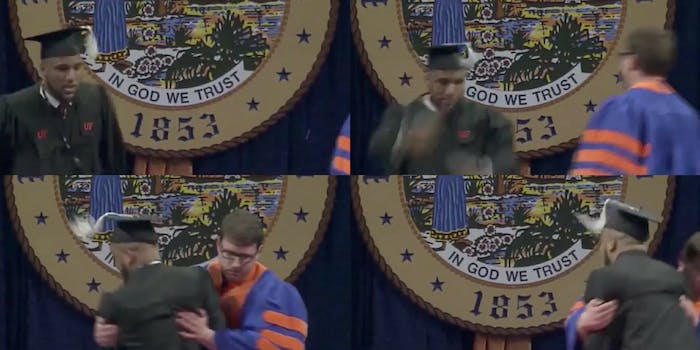 University officials apologize after Black students were manhandled at graduation

The university president says they've ended this 'practice'—but why was it done to begin with?

A University of Florida staff member manhandled several graduating Black students during their commencement ceremony on Saturday, prompting outrage online and an apology from the university’s president.

According to footage taken at the commencement ceremony and videos from attendees, an usher manhandled Black students who were taking slightly more time to cross the stage after their names were called. In videos of the incidents, the usher grabbed onto students, sometimes by the collar and some in an embrace with both arms, before swinging them around to the rest of the walkway.

Somebody please find out this employee’s name!! Every time a Black student took more than TWO seconds, he aggressively pushed them. Watch it for yourself. #ItsGreatUF pic.twitter.com/zMee1nMbUZ

One student at the ceremony, Christopher Garcia-Wilde, told Gainesville.com that he had noticed Black students were being pushed aggressively if they took more time. Garcia-Wilde said it’s a years-long tradition to stroll at graduation, a cultural tradition for Black and Latino fraternities and sororities. He said he decided not to stroll and just held up his fist because he was afraid, though his friends did.

Oliver Telusma, one of Garcia-Wilde’s friends and a political science graduate, told the publication he felt embarrassed and degraded over the event.

“I had just started…and he picked me up and turned me around, which I thought was kind of embarrassing and degrading to be handled in that manner,” he said. “It was just really uncalled for, especially for anyone not martially trained to do that.”

On Twitter, University of Florida President Kent Fuchs issued an apology on Sunday, with a spokesperson for the university stating they are reviewing the situation before revealing the staff member’s name.

“During one of this weekend’s commencement ceremonies, we were inappropriately aggressive in rushing students across the stage,” Fuchs tweeted. “I personally apologize and am reaching out to the students involved.”

During one of this weekend’s commencement ceremonies, we were inappropriately aggressive in rushing students across the stage. I personally apologize, and am reaching out to the students involved. (1/2)

“I want our students to know that we’ve changed that practice, and we also want each of you to know that we celebrate you, your graduation, and your accomplishments. Congratulations, all,” Fuchs later said during a Sunday graduation ceremony.

According to Gainesville.com, “most” of the students manhandled were Black, though the footage shared online shows all of the graduates thrown by the staff member are Black. The university spokesperson said she hasn’t reviewed the tapes to see if this only happened to Black graduates.

“It’s a situation where time and time again the university has made Black bodies feel unsafe,” Telusma said.