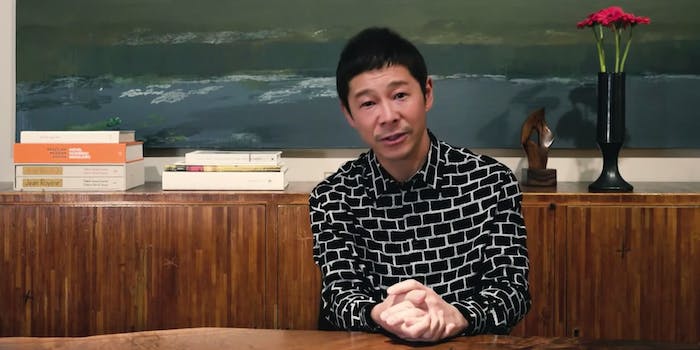 The SpaceX investor is looking for a woman who's 'always positive.'

Japanese billionaire Yusaku Maezawa has opened an online application for a girlfriend who will “go to the moon with him” on a SpaceX aircraft.

Maezawa, whose worth was pinned at $2 billion by the most recent Forbes estimate, put down a deposit with Elon Musk’s company to be the first private customer of the rocket, the Verge reported in 2018. It’s anticipated that his trip could take place as soon as 2023, and as the date looms closer, Maezawa wants to reserve a spot for someone special.

His advertisement invites a future girlfriend to take part in his moon trip and a “serious matchmaking documentary” titled Full Moon Lovers. An application for the role, which Maezawa appears to be taking very seriously, is listed on a website.

“With that future partner of mine, I want to shout our love and world peace from outer space,” he wrote on the site, which also includes “conditions” for applicants: They must be females older than 20-years-old and “always positive.” Applicants are also asked their height and their “impression of Yusaku Maezawa.”

The application is due by Jan. 17, and after a thorough screening process, the final pick will be announced in March. The short-listed applicants will have intimate dates with Maezawa before he reaches a decision.

Maezawa is the founder of Japan’s largest online fashion store Zozotown, and he’s known as an art collector. He bought a Jean-Michel Basquiat painting in 2017 for a little over a $100 million.

Maezawa secured between six to eight other seats on the rocket to take artists along with him, whom he said could be “inspired” from the trip, according to the Verge. Musk did not reveal how much Maezawa paid, but it was enough to partially fund the development of the rocket.

“It makes a difference,” Musk said in 2018 about Maezawa’s determination. “He puts his money where his mouth is. He’s legit.”

“Why not be the ‘first woman’ to travel to the moon?” Maezawa’s tweeted Sunday, helpfully offering a reminder that a woman has never been on the moon.

But as the Verge points out, SpaceX’s rocket won’t actually land on the moon; the aircraft will orbit around it and return. Hopefully, Maezawa’s future girlfriend won’t mind.