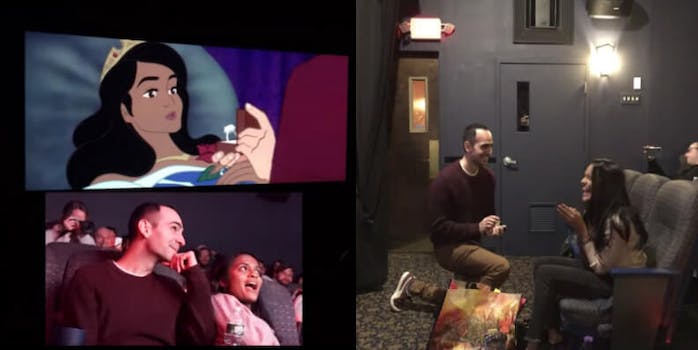 Man edits himself and girlfriend into ‘Sleeping Beauty’ to propose

I am definitely not crying.

Social media has blessed the world with many heartfelt and thoughtful marriage proposals.

But one man may have just raised the bar with his creative approach to asking his girlfriend to tie the knot: He edited both of them into her favorite movie, Sleeping Beauty. And the proposal couldn’t be any more of a tear-jerker.

In a video uploaded to YouTube by Lee Lochler, the man who proposed, the pair are can be seen sitting in a theater watching the Disney classic. When Prince Phillip leans over to kiss Princess Aurora, she morphs into a beautiful, brown princess who strikingly resembles Lochler’s girlfriend. The prince is also edited to look like Lochler. The prince then presents a ring and proceeds to toss it over to the real-life Lochler. Lochler catches it and begins his proposal.

“It’s not every day you get to propose to your high school sweetheart,” he begins.

“Oh my God. These poor people,” his girlfriend says, worried about the other people watching the movie in the theater.

When she turns around, she realizes her friends and family are actually the other people in the theater and starts to gush.

“Will you live happily ever after with me?” he finally asks.

Unsurprisingly, she responds with a “Yes,” and the crowd erupts in applause.

Some fairytales do come true, after all.