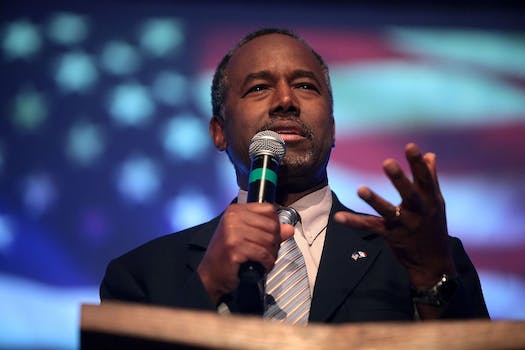 Carson is predicted to become Health and Human Services secretary—and he has disturbing beliefs about LGBTQ people.

The LGBTQ community and its allies continue to brace themselves as names from Donald Trump’s potential cabinet begin to surface. Ben Carson, one of the people predicted to fill the role of Health and Human Services secretary, according to Politico, has been no ally to LGBTQ people. He’s compared same-sex marriage to bestiality, believes marriage equality is a “Marxist plot,” homosexuality is a choice (inexplicably caused by prison rape), and LGBTQ people should be more tolerant toward people who don’t believe they should have rights.

The Health and Human Services secretary oversees the protection of “health and well-being of all Americans…by providing for effective health and human services and fostering advances in medicine, public health, and social services,” according to the U.S. Department of Health and Human Services website. As someone who believes that “transgender people are the height of absurdity” and biology outweighs identity, the trans community has a very valid reason to be concerned about their health care and well-being under a HHS headed by Carson. The HHS also provides most of the funds for Planned Parenthood, where many people—especially women, people of color, and the LGBTQ community—receive crucial healthcare and educational services. Oh, and in case you were wondering, no, Carson does not hold very charitable views of the organization.

Trump’s administration is shaping up to include many members who have voted against policies promoting rights for LGBTQ people or have previously made comments promising to limit those rights including Majority Leader Paul Ryan and Vice President-elect Mike Pence, as well as the president-elect himself.