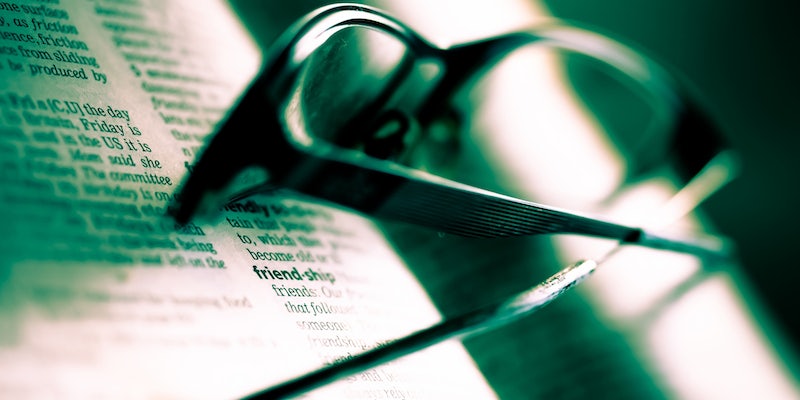 The Internet has had a profound effect on the way we use language. Because hivemind.

Over the river and through the woods, because prepositions.

Okay, so maybe it’s a little difficult to grasp if you don’t spend a lot of time reading and writing things on the Web, because linguistic nuances.

But the word “because” is the latest in a long line of words whose meanings and usage have dramatically altered due to the Internet’s irony, hyperbole, and constant desire for shorthand communication.

Linguists and linguaphiles are embracing the use of “because” as a preposition. Traditionally, “because” functions as a conjunction, connecting two wordy parts of a sentence.  With the new usage, which bespeaks an informal, Internet-based tone, writers can reduce wordy explanations to a single, simple noun or idea that anyone can understand—at least, anyone who’s Internet-savvy.

It’s a throwback to the kind of Buffy-speak made popular by Joss Whedon: the sense that everyone reading a text is on the same page, all possessed of roughly the same level of cultural understanding, so everyone can speak the same shorthand.

So, “because + noun” becomes shorthand for:

A) Intense, yet inarticulate feelings on a subject, because Tumblr:

B) A total lack of time or interest in articulating things logically, because Reddit:

“It’s a usage,” writes Megan Garber for the Atlantic, “that’s exceptionally bloggy and aggressively casual and implicitly ironic.” (Because adverbs.)

This tactic may make no sense to the uninitiated, but actually rewards the reader for being able to make multiple connections as they read: From the failed English anarchist Guy Fawkes we derive the popular Guy Fawkes mask, first mainstreamed in the 2006 film V for Vendetta and adopted as a universal symbol for the Anonymous hacker movement.

“Because Guy Fawkes” tells you everything you want to know about the incident, while taking a slightly disdainful approach to the motive: The student was a hacker working as part of the Anonymous collective because blah blah Internet revolution.

The act of trading out several words for one “because + noun” doesn’t necessarily dumb down the meaning level for readers. Instead, it opens up more possibilities for more interpretations.

Even better, if linguists are truly starting to embrace Internet speech patterns as valid grammatical shifts, we have all kinds of questions: When do we officially get “feels” as a noun? How soon can we drop subject pronouns and articles altogether. and just start sentences with verbs and lack of “a” and “the,” Bridget Jones-style? Why haven’t “I can’t even” or “[Verb] all the [nouns]” become established as common idioms?

If you fear such questions trivialize the good old lingua franca, just remind yourself that language is constantly evolving—it just evolves faster and more publicly on the Internet these days.

And if Merriam-Webster can communicate its point to the rest of us with, “Added new part of speech to dictionary because Internet,” then perhaps we should take the wisdom of one of the great linguists to heart:

Brevity, because soul of wit.