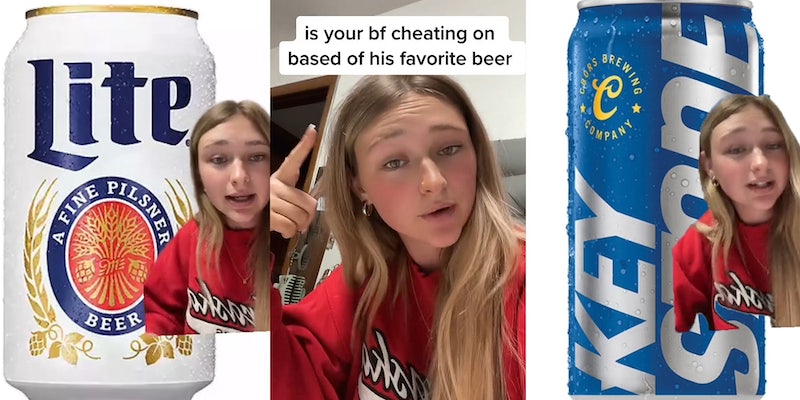 ‘As soon as he orders this, get up and leave’: Bartender can tell which guys are cheating based on what beer they order

'As a Miller fan I approve this message.'

A bartender went viral on TikTok after she evaluated different types of boyfriends based on the type of beer they order.

The video only features user Paige (@paigelydick0) as she lists different types of beers that certain boyfriends drink.

“Is your boyfriend cheating based of his favorite beer?” Paige begins. “My credentials: I work at a bar and I’ve got horrible relationships and they all drank something different, so listen up.”

Paige starts off the video with Coors Light. According to Paige, if your guy drinks Coors Light, he’s “probably a nice guy.” Coors Light drinkers are usually sweet and you have nothing to worry about. On the other hand, he probably flirts with women at the bar and is very cocky.

Then it’s Bud Light. “If your fiancé, your husband, your boyfriend, your sneaky link is drinking Bud Light, he’s probably gay,” Paige claims. After Bud Light is Miller Lite. If a man orders this type of beer on a date, Paige advises the viewer to marry him. This type of man is a “cute little country boy,” who will “build you up,” and “never cheat.”

The most controversial beer is Michelob Ultra. Paige strongly suggests to the man if he drinks this type of beer. “As soon as he orders this, get up and leave,” she says. “This man is full-on cheating… It isn’t innocent flirting. This beer drinker has another life, another marriage with kids or baby mama. Stay away from this kind of man.”

Keystone drinkers can be labeled in one word: Abusive. According to Paige, this guy “beats you.” That’s it. Finally, Busch Light drinkers fall into two different categories: Either good or bad. However, the majority are “sweethearts.” and “They’re not better than Miller Light but they’re close.”

The video has been viewed 5 million times as of Thursday. Paige stated in the comments that this video isn’t meant to be taken seriously, “reminder: this is based off of the kinds of people who order this at the bar i work at/ or people i know. it’s jokes.” Many beer drinkers in the comments section agreed with Paige.

“Most accurate beer facts ever. Great video,” one user wrote.

“As a miller fan I approve this message,” a second agreed.

Due to how popular the video became and complaints from users about leaving out other beers, Paige made part two of the video where she evaluated the type of boyfriends Budweiser, Natural Light, Corona Extra, Pabst Blue Ribbon, Modelo, and Corona Banquet drinkers are.