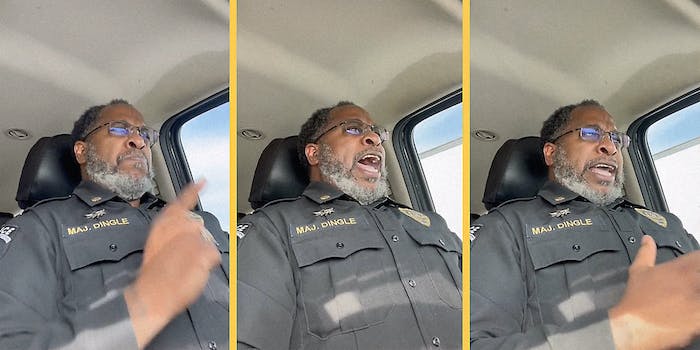 'I am so goddamn tired.'

An Atlanta area police officer went viral after a TikTok post showed him lamenting the trials of his chosen profession, saying, “All of us are not bad.”

The video is a performative display that doesn’t accurately portray the criticism and activism aimed at reforming, and in some cases eliminating, police departments across the country.

Major Kevin Dingle, the operations commander at the Morehouse School of Medicine’s public safety office, recorded the video in the wake of recent deaths related to police interactions.

“I am so goddamn tired. I wake up every morning and kiss my family goodbye, knowing there’s a possibility I won’t come home,” Dingle says to the camera. “I am tired of every time I wake up in the morning there’s someone else polarizing the fact that maybe law enforcement is just not a good thing. All of us are not bad … Most of us are not. There are bad people in every career.

“I give everything,” the officer says before cutting off the video.

After Derek Chauvin murdered George Floyd, tensions over law enforcement’s discrimination and overarching culture of violence came to a head and divided opinions along sociopolitical lines.

Amid calls to redirect public safety dollars or even eliminate police departments, serious investigations of systemic racism via policing are playing out in public. Chauvin’s trial is one example, but on the same day the jury delivered a verdict, police killed Ma’Khia Bryant, a 16-year-old Black girl.

The contention with Dingle’s sentiment isn’t that all cops are violent and problematic. Part of the core issue in the video is the conflation of the chosen profession of policing with innate identity of race.

Dingle’s self-description as a “tired” officer, “doing the best he can,” is, in fact, disrespectful to the families of Black people killed by police.

It also dismisses the realities of police officers’ overwhelming power over minority communities, e.g., officers unequipped to deal with mental health issues often respond to them with undue force.

Given the lack of internal policing of their own, so to speak, the lines of “good” and “bad” officers have always been blurred. The fuzz comes from the refusal of public safety advocates to acknowledge the apparatus is interlocked with systemic racism and class enforcement systems.

Police roles were invented to enforce those power hierarchies in the first place.

Moreover, the idea of “bad people in every career” does not capture the impunity of police who use undue force.

Twitter user @Delibird444 joked in reply to Dingle’s video, “‘If a cook rubs his balls all over your meal, we can expect him to get fired/jailed. When a cop murders someone he gets a paid vacation and/or a transfer to a different county while his colleagues do everything possible to defend him.”