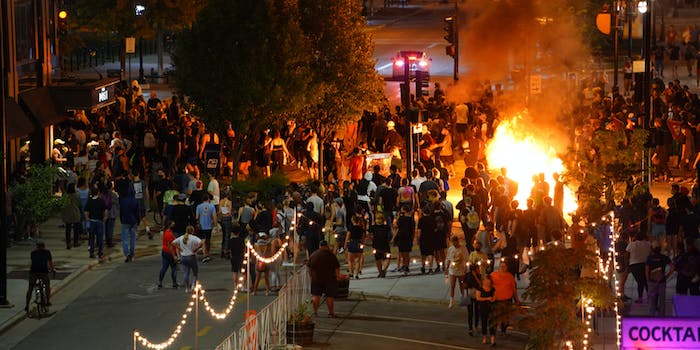 'The fundraiser has since received widespread backlash from other university students.'

A conservative student group is receiving backlash for fundraising for the legal defense of the 17-year-old so-called “vigilante” accused of killing two and injuring at least one person at a protest on Tuesday in Kenosha, Wisconsin.

Conservative Republicans United (CRU), a group at Arizona State University, launched its fundraiser Thursday night and announced that half of the funds raised during the semester will go toward paying for the legal defense of Kyle Rittenhouse, who was charged with first-degree murder.

The protest took place after police shot Jacob Blake, a 29-year-old Black man, seven times in the back. Blake was left paralyzed from the waist down as a result of his injuries.

The group coming to Rittenhouse’s defense claims that the 17-year-old is not a “vigilante” but a “citizen who attempted to help a city in chaos.”

“He does not deserve to have his entire life destroyed because of the actions of violent anarchists during a lawless riot,” the group tweeted on Thursday.

The fundraiser has since received widespread backlash from other university students and was denounced by the school’s main Republican student organization, ASU College Republicans.

In a statement released Saturday night, the organization condemned the operation of CRU and said it “refuses to legitimize those possessing radical, Anti-American views.” The group is also calling for the university to launch an investigation into the organization’s fundraiser and operations.

“We do not associate with nor condone the recent actions involving the legal defense fund of a man who shot and killed several Americans in Wisconsin,” ASU College Republicans said.

“When the story first broke, people thought I was the president of this organization,” Pitts said. “I got up to 20 calls, several of which were death threats against me. So there is a clear issue with them having such a similar name, not to mention for the reputation of hundreds of our members, who have never heard of CRU and never associated with them, but now might be tied to them because of their actions.”

In a press release, the student organization also accused CRU of “a history of blatantly racist and anti-semitic conduct.” Another political student group at ASU, College Libertarians, made a similar accusation via Twitter.

College Libertarian President Morgan Fox told the Daily Dot that while it’s disappointing that a group like CRU is operating under the university’s name, several organizations have been swift and united in speaking out against their actions.

“I’m very happy that the groups that actually represent a majority of students; Young Democrats, College Republicans and College Libertarians have all been united in their condemnation of this group,” Fox said. “It shows that they really are a fringe group and that they’re not representative of the main ASU student body.”

Multiple students tweeted throughout the weekend asking the university to condemn the group’s fundraiser. The university also acknowledged the fundraiser and said it’s meeting with CRU to “learn more about their decision,” according to an interview with the Arizona Republic.

“While there is no policy prohibiting student groups from raising funds for a cause such as this, ASU does not endorse or support this effort,” university officials tweeted on Saturday.

As of Monday, Rittenhouse remains in custody after being arrested at his home in Illinois the day after the killings.

Update 6:01pm CT, Sept. 1: This article has been updated with quotes from Morgan Fox and Joseph Pitts.