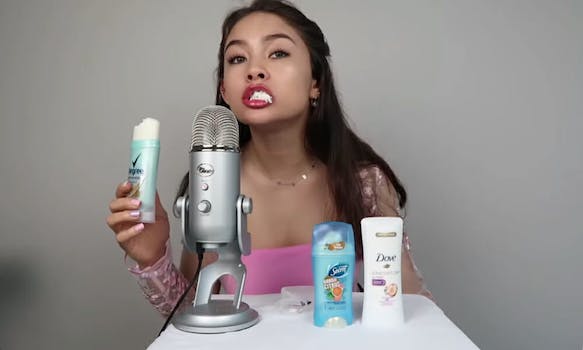 Has the fad gone too far?

YouTuber Cody Ko recently used an ASMR artist’s videos to assert that the fad has gone way too far. The ASMR artist seemingly eats inedible objects and sometimes toxic substances in her videos.

“She realizes that there is so much shit content on the internet that this is what you gotta do to get noticed, unfortunately,” Ko says in his video, which was uploaded on Wednesday. “And it’s working. I mean, we’re talking about it right now.”

In one video, she first whips out a stick of deodorant and opens it, making a soothing popping noise. She then taps on it with her nails and twists up the deodorant stick. These are all typical features of an ASMR video.

But then things get weird. She takes a huge bite out of the deodorant stick, munches on it for a while, before consuming it.

“What is this? Killing myself ASMR,” Ko asks at one point of his video. He dubs the fad “KMS ASMR.”

Ko then details some of the other videos the ASMR shock jock has under her belt, which include eating rocks, makeup, a raw onion, and candles—all ASMR style. In some of her other videos, Donnelly eats glue, bugs, candles, sand, money and even drinks bleach.

In Donnelly’s “Eating Makeup ASMR” video, she brings out mascara and reinserts the wand in and out of its tube to make a typical ASMR noise. Things take an atypical turn when she decides to put the wand, full of mascara, into her mouth—and eat it. She also squirts a tube of foundation into her mouth and swallows it.

“What the fuck am I watching? Why am I watching this?” Ko asks about the mascara video. “I’m kind of worried about this girl. It kinda seems like she has a death wish or something. Someone should call poison control on her behalf.”

ASMR definitely has done its part to soothe anxieties and act as a sleep aid for its vast online community around the world. But it seems ASMR artists are still pushing the fad to see how far it can go; for instance, there are whole genres dedicated to ASMR chalk-eating and bug-eating. Donnelly isn’t the first or even the second person to eat deodorant.

She would likely be very sick or even dead if she was actually consuming copious amounts of real deodorant, bleach, glue, candles, chalk, and many of the other products featured in her videos on the regular. Many YouTubers eat seemingly unusual things but are actually eating edible food made to look like objects. Hopefully, that’s the case with Donnelly, though she doesn’t add any disclaimers to her videos.

Doing ridiculous things for views isn’t just contained to the ASMR online community. The Paul brothers have proved that they will do just about anything for views with a running list of their own downright ridiculous moments. Most notably, in 2018, Logan Paul filmed a dead body and posted it for his millions of subscribers to see. Between the two brothers, they have tasered a dead rat, vlogged a car crash, used drama with an ex-girlfriend for content, done a dangerous bird box challenge, promoted gambling to children, and the list goes on.

Clickbait proves to be a problem with many YouTubers, not just Donnelly or the ASMR community.

Donnelly began making her shocking ASMR videos four months ago and already has over 31,000 subscribers. She did not immediately respond to the Daily Dot’s request for comment.