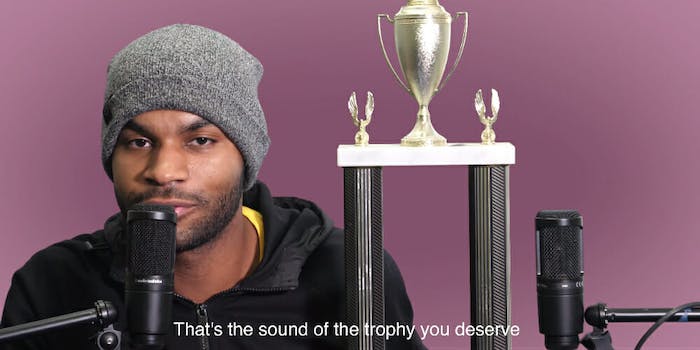 ‘Daily Show’ writer does ASMR to ease your white guilt

The Daily Show writer Randall Otis delighted many of his Twitter followers on Wednesday when he posted a video of himself doing “ASMR for white liberals,” according to Vulture.

“Welcome to ASMR for white liberals. It’s me, a real Black guy,” he begins in the whispery ASMR voice. “I’m here to help you get rid of some of that white guilt.”

The video is obviously dripping in sarcasm and satirizing the performative allyship exhibited by white liberals. It’s also a parody of Autonomous Sensory Meridian Response, or more commonly known as ASMR, the internet phenomenon where people make calming noises with their mouths or by using objects to help people relax or fall asleep.

YouTubers do this by using a variety of sounds and objects, like softly reading passages from books; tapping or scratching things, like a microphone; and even chomping down on some food. These are all called “triggers” in the ASMR world.

Otis got creative and rubbed his hair on the microphone to create a relaxing noise, with the caption: “*BLACK HAIR ON MICROPHONE.*”

“You hear that? That’s the sound of the hair you’ve always wanted to touch,” Otis says. “And we love it. We love it when you do that. None of us think it’s weird. It’s pretty dope.”

At this moment, most viewers lost it.

“’Black hair’ Tell my Mom to bury me in my Gucci slides,” Twitter user @jtp4eva wrote.

That's how I died tell my family.

This is the point where I LOST IT. pic.twitter.com/DptIEiknbE

Otis also made soothing sounds by tapping on a trophy. “You hear that? That’s the sound of the trophy you deserve for not being racist,” Otis says in the video. “Good for you. We’re so proud of you. You’re such a good person. You’re better than the rest of them. We love you.”

Otis brought the controversial movie Green Book into the mix. “Green Book was a good movie. It’s the best movie since Crash,” he declares in the video. He also stated it’s impossible to be a racist if you’ve had sex with a Black person and announced that it’s OK to talk like a Black teen online. “Yas Qween. Yas Qween,” he says while clapping into the mic.

Otis signed off the video with a hypothetical question: “Remember, if you say the N-word and no one hears it, did you really say it?”

Twitter user @luckydoghot has a good idea for the next one. “Can we also get an ASMR for Black conservatives?” they asked. “‘Your family will speak to you again one day… White conservatives see you as an equal, & would never call you an N behind your back.'”