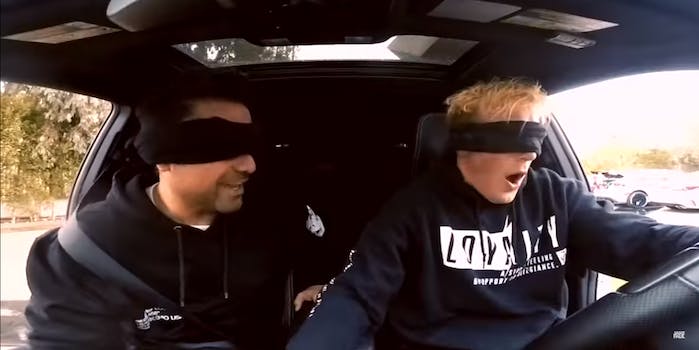 Did this violate YouTube's rules?

Jake Paul, the over-the-top YouTuber who spent the last year trashing mansions and promoting gambling to kids, is back at it. This time, the 21-year-old appears to have violated YouTube‘s policy on “harmful or dangerous content” with a new video.

In a video titled “24 Hour Bird Box Blindfold Challenge” uploaded on Monday, Paul and his friend George don blindfolds for somewhat less than 24 hours. In the course of the almost 12-minute video, a blindfolded Paul drives a car, disrupts a library, walks into traffic, and harasses a restaurant full of people.

The Bird Box Challenge is pretty self-explanatory—at least if you’ve seen the movie. In the film, Sandra Bullock‘s character braves a treacherous journey with two young children, blindfolded all the while in order to avoid self-inflicted death by a mysterious monster.

The challenge follows in form. Any participant must engage in a series of amusing or challenging tasks, all while blindfolded. Engagement in the challenge led Netflix to issuing a warning on Twitter. “PLEASE DO NOT HURT YOURSELVES WITH THIS BIRD BOX CHALLENGE,” it wrote. “We don’t know how this started, and we appreciate the love, but Boy and Girl have just one wish for 2019 and it is that you do not end up in the hospital due to memes.”

Can’t believe I have to say this, but: PLEASE DO NOT HURT YOURSELVES WITH THIS BIRD BOX CHALLENGE. We don’t know how this started, and we appreciate the love, but Boy and Girl have just one wish for 2019 and it is that you not end up in the hospital due to memes.

In the course of his ill-advised stunt, Paul appeared to violate YouTube’s community guidelines. In its policy on harmful or dangerous content, the company stated that “we draw the line at content that intends to incite violence or encourage dangerous or illegal activities that have an inherent risk of serious physical harm or death.”

At the beginning of Paul’s video, a tiny disclaimer appears stating “Do not try this at home—see disclaimer in description.” The text quickly disappears and does not reappear in the course of the video. The warning in the description is more clear.

“Please be warned (and we cannot possibly stress this enough); under no circumstances should any challenges, stunts, or pranks be attempted by any of our viewers,” it says. “All challenges, stunts, and pranks are performed by trained professionals in a controlled environment with proper safety measures taken, and are for entertainment purposes only! Again, do not try this at home!”

To his credit, Paul also verbally advised viewers not to replicate his actions in the video itself. Still, given the young age of his typical viewer, performing stunts like this is almost certain to encourage a response. YouTube is already responding to Bird Box Challenge videos, according to Fast Company. The company is removing videos of people participating in the challenge, but only those involving children.

A YouTube spokesperson told the Daily Dot on Tuesdasy that “YouTube’s Community Guidelines have long prohibited content intended to encourage dangerous activities that have an inherent risk of physical harm. Our policies are especially strict when it comes to content featuring minors and we work to quickly remove flagged videos that violate these policies.”

As the Verge noted, Paul’s video was eventually age-restricted, meaning he can’t monetize the vlog.

But that won’t necessarily stop his young audience from attempting a recreation of his stunts. It’s one thing to wear a blindfold and stumble around a contained space, and it’s entirely another to endanger others with your antics.

Update 10:08am CT, Jan.9: Paul’s Bird Box Challenge vlog no longer appears on his channel. At this point, it’s unclear who deleted the video—whether it was YouTube or Paul himself.