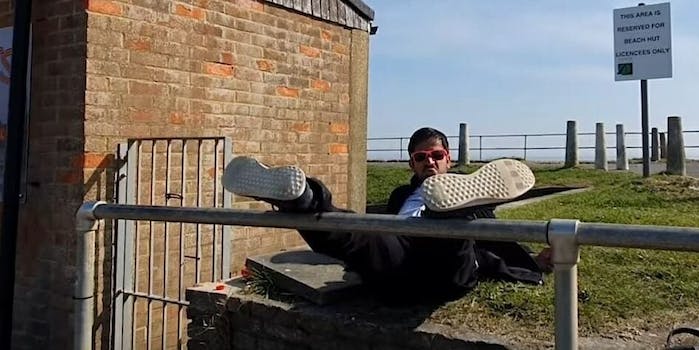 He traveled far and wide to meet his hero.

Just because PewDiePie has conceded the world’s No. 1 YouTube spot to Bollywood channel T-Series, that doesn’t mean Indian YouTuber Saiman Says will halt his near worship of PewDiePie. In fact, Saiman Says is trying to meet PewDiePie in person—and calling it a “pilgrimage” in the process.

During the months-long battle to see whether PewDiePie could hold off T-Series to be the most popular YouTube channel in the world, Saiman Says bought billboards in Mumbai, showed up at workplaces to beg for people to subscribe to PewDiePie, and passed out flyers on the subway.

At that time in November, Saiman Says had about 34,000 subscribers. Now, he has more than 200,000—and he’s trying to use that newly found YouTube clout to set up an encounter with his YouTube hero.

Filming at the same beach where PewDiePie scored a massively viral diss track aimed at T-Series called “Bitch Lasagna,” Saiman Says laments that two of PewDiePie’s music videos (“Bitch Lasagna” and “Congratulations”) have been banned in India for their “racist, inflammatory and hateful remarks.”

“Life has been tough for me,” Saimain Says said in the video. “I used to watch ‘Bitch Lasagna’ 399 times in a day. Now, I cannot even watch it once back in India. I had to do something about it.”

So, he went on what he said was a “holy pilgrimage” to the U.K. In the tongue-in-cheek video, Saiman Says said he’ll simply wait at the beach and in the meantime, chow down on Indian snacks like bhel, soan papdi, and khakra. Meanwhile, T-Series (95.3 million YouTube subscribers) has taken a lead of about 630,000 over PewDiePie.

Saiman Says’ video, with the threatening and yet desperate title of “PewDiePie, I’M COMING FOR YOU !!! (meet me pls?)” ends with Saiman Says eating fruit at a pier in England and patiently waiting for his online muse.

Soon after, though, Saiman Says clarified on Twitter, writing, “So a post about my video is trending on the subreddit. Some are thinking it’s creepy. No, I [didn’t] come to the U.K. just to meet Pewds. I had a prior project in the U.K. … and I later decided that this would be a fun idea. I just hope to meet @pewdiepie as a fan.”

PewDiePie, heartbreakingly, has not yet publicly responded.