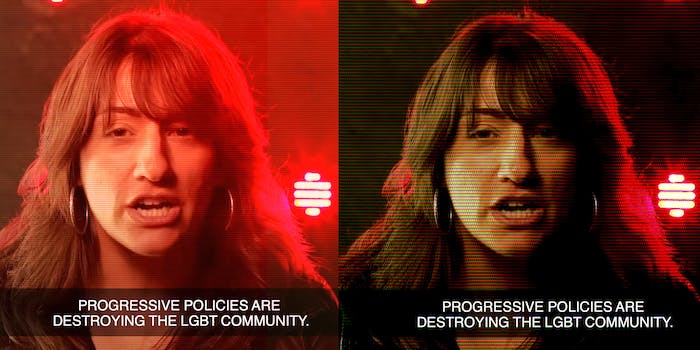 It's a pipeline with far-right funding behind it.

A long-haired femme with large hoop earrings leans into the camera. She looks angry, albeit slightly indignant. She claims in a thick New York accent that she’s “one of the most hated lesbian women on the internet.” The video soon reveals why: she wants Judge Amy Coney Barrett confirmed to the Supreme Court as Ruth Bader Ginsburg’s true successor.

“The greatest way in my opinion to honor her life would be to appoint another strong woman to the Supreme Court, like Amy Coney Barrett, who is a pinnacle of female success,” the woman says. “But progressive feminists attack her because she’s a mother, she’s traditional, she’s Catholic, and most of all, she’s a conservative. That’s not the kind of woman they want her to be.”

The moment I saw that video I recognized the face. Damn, that’s what happened to lesbian YouTuber Arielle Scarcella? She’s making videos for the Log Cabin Republicans in support of Amy Coney Barrett?

Her turn to the far-right is shocking, but it’s a symptom of a growing problem: conservatives are increasingly building a pipeline to radicalize liberal women who have bigoted misgivings with the left. And in Scarcella’s case, that pipeline started with transmisogyny, was bolstered by TERFs, and led her to share her full-throated support for Barrett’s nomination.

It’s a path that she not just embraced, but is now promoting. From her lead, many more liberal women will abandon the left and increasingly turn to the far-right, making life more dangerous for the marginalized women who face the Christian right’s scorn

Scarcella, whose YouTube career goes back about a decade, wasn’t always a Log Cabin Republican “OUTspoken” about Trump’s Supreme Court pick. Years ago when trans sex education material was scarcely available online, Scarcella did a great clip where she sat down with a post-op trans woman and talked a bit about her vaginoplasty surgery. And then in 2018, she interviewed a trans woman who enjoys using her penis during sex, and the two talked about what that means for trans sexuality. Both clips destigmatized a lot around trans womanhood and transitioning, and were signs of good faith on her part to the trans community.

But something ugly happened that same year: Scarcella started to shift focus away from talking about trans topics in an educational (albeit slightly awkward) way, and moved more toward negative videos about trans feminine people. First, she brought on right-wing trans YouTuber Blaire White to defend lesbians who do not want to have sex with trans women who have penises. Then, she posted a rant video complaining about “trans activists” and feminine penises. Scarcella stumbled onto a sticking point: was it OK for lesbians to reject a trans woman based solely on her genitalia? Soon after, her videos became more and more conservative in nature, from criticizing fat positivity to claiming trans people “want to erase women.”

How do we get from a very complicated conversation about bigotry in the lesbian community, and end up with a video for the Log Cabin Republicans praising Donald Trump? Not by coincidence. Scarcella’s radicalization began through TERF rhetoric: like TERFs, she claimed trans women with penises have “male” body parts. But as writer MerriCatherine explains, this sort of rhetoric relies on anti-scientific bioessentialism that ignores “the hundreds of other examples of ‘transgender’ behavior and genotypical ‘anomalies’ in other species of existence,” not to mention “excluding cis women without uteruses, breasts, periods, two x chromosomes, etc.” In other words, Scarcella and her fellow transphobes must first sacrifice reality to defend their bigotry.

This, too, is true for fascism. In a syndicated article for Salon, journalist Chris Hedges describes Amy Coney Barrett as subservient to corporations, supportive of labor suppression, antagonistic to civil liberties, and most importantly of all, built with a religious fortitude around “restoring law and order” and “right and wrong” that challenges free democracy as we know it. She is a Christian fascist.

“The Christian fascists, like all fascist movements, seek to create their own truth. It discredits verifiable fact, science, law, and rationality,” Hedges says. “The reality-based world, as in all totalitarian movements, is snuffed out.”

TERFs also create their own truth. They, as Hedges writes of Christian fascists, also “abandon the world of cause and effect and replace it with a world of magic,” a magic world where women are defined by whether they were born with a vagina or still have their penis. The far-right has mobilized TERFdom because TERFs make for good fascists, and they sow discord among liberal women who struggle with trans rights.

“Trans women are the wedge issue used by the far right to convert middling liberal women into conservative reactionaries,” Twitter user @9BillionTigers said in a viral thread that inspired this article. “To be clear trans women are, or rather the concept of trans women is, used specifically to reactionarize cis women, more specifically cis lesbians, and most feminist and/or lesbian communities have in no way undergone any self-reflection about this; many consciously refuse to.”

The far-right has tapped into this wedge with plenty of funds to go around. Grace Lavery, an associate professor of English, Critical Theory, and Gender & Women’s Studies at UC Berkeley, says the conservative Christian Heritage Foundation and the transphobic Women’s Liberation Front have “well known” connections, pointing to a Washington Post article on the two. Similarly, the Alliance Defending Liberty offers funding to feminist groups for anti-trans events, as long as they pay no lipservice to LGBTQ rights nor feminist reproductive rights, she explained (Vox similarly points out ADL’s connections with WoLF). Combined with the Catholic Church’s push against so-called “gender ideology,” conservatives have successfully turned transphobia into a flashpoint issue to divide-and-conquer the LGBT letters and filter anti-T gays into right-wing radicalization.

“As a result of this enormously powerful move to split transgender rights from those of the LGB community, a number of LGB celebrities have found themselves––as has Arielle Scarcella––in full MAGA riot gear,” Lavery told me. “And a larger cohort of straight men have jumped into the fight, given enough cover by the TERFs to import fashy ‘debate-me-bro’ tactics, coupled with vicious harassment and libel.”

Scarcella’s descent into fascism is a sad portrait indeed. But there are many Scarcella’s, one for every woman who, too, finds one point she just can’t agree with on the left. Maybe it’s women with penises. Maybe it’s sex workers’ rights. Maybe it’s Black Lives Matter. Usually it’s a mixture. The far-right has found these women as the weakest link in the left, and are picking them off, one by one, preying on their internalized bigotry and letting it fester.

The irony, of course, is that for all of Scarcella’s rage, she is just a puppet for the Barrett’s of the world. She plays the role only as far as she’s useful. If she somehow finds her way out of the fascist pipeline, another “OUTspoken” Log Cabin lesbian will surely replace her, marching the right onward, convincing milquetoast liberals that their bigoted discomfort is just a moral calling against the “woke left.” All the while, the far-right pipeline will continue to bring disillusioned liberal women into its fold, manipulating them into supporting conservative moral crusades around abortion, trans women, sex work, and religious freedom

“I’m not sure what hope there is, given the influx of money, but the first and most urgent thing is for feminists of all backgrounds to confront the Trumpists forces that are forcing their way into our communities and organizations,” Lavery said. “It is sometimes hard to remain optimistic.”