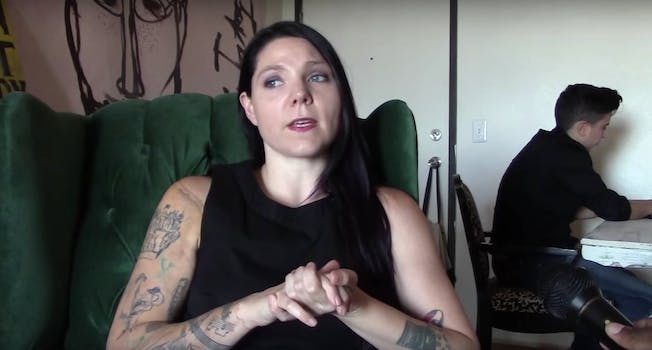 Is queer women-centered site AfterEllen shut down for good?

The LGBT media world was rocked yesterday with the shakeup at AfterEllen, a queer women-centered blog that was founded in 2002. Rumors initially spread that AfterEllen would be shutting down, but a post by Emrah Kovacoglu, general manager of TotallyHer Media (a subsidiary of Evolve Media, which bought AfterEllen two years ago), clarifies: “We decided we could not keep Trish Bendix on as the full-time editor-in-chief,” and that it “will continue to work with our freelancers and contributors to cover the many topics and news that are important to the LGBT community.”

Just want that means for the site has left readers confused, especially after Bendix wrote a post on her personal Tumblr, saying, “AfterEllen as we know it will be effectively shutting down as of Friday.” She blamed the changes on “white heterosexual men” pushing out lesbian voices.

According to Bendix, the site doesn’t sound like it will remain all that active, despite Kovacoglu’s insistence. “Evolve has decided to keep the site and its archives alive for now, with a promise of periodically publishing freelance pieces in the future,” writes Bendix.

A group of AfterEllen staff members say Bendix was let go two days early and denied severance because of her Tumblr post—and, in turn, they have started a Generosity campaign to raise money for her. “Our editor in chief, Trish, posted a true and personal account of the circumstances. The story was picked up by the Advocate, and immediately afterwards, AfterEllen’s parent company decided to terminate her two days early and rescind their promise of severance pay,” says the staff.

Brian Fitzgerald, president and co-founder of Evolve Media, told the Advocate that the site will remain up and Bendix’s termination has “nothing to do with being a company owned by men, or any lack of sensitivity for the LGBTQ community. We have valued our time with Trish and she has been great for the site. This decision is one that we regretfully had to make based on the financial performance of the site.”

When reached for comment, Bendix told the Daily Dot that she’d let her bosses know she’d be telling readers about the site’s changes via her own social media channels, since they wouldn’t let her do so on AfterEllen. She explains:

The severance agreement was made verbally—I haven’t signed anything yet as part of my exit. I honestly did not expect a backlash, per se, but I truly believe the company did not understand that AfterEllen is not merely a website, and that it means so much to so many. Queer women are so lacking in spaces—virtual or physical—that we are really feeling these losses in a way that people who come from the majority can not truly process unless they really, really try.

When my boss told me I could not write anything on the site itself to let readers know of the changes, I let them know I’d be doing so on my own social channels, as it’s only fair our longtime fans and friends and family would not come back to the site daily, expecting the regular morning column, television recaps, essays, interviews, reviews, and content that they’ve been receiving for 10 years. I can’t imagine how I’d feel if my favorite website—a place that was part of my identity and where I felt wholly myself—stopped delivering those things on a whim without any explanation. It’s too much of a responsibility to have the knowledge and not pass it on to people who are not just “readers” to me, but my community.

If I have to lose the three week’s severance I had to argue for in the first place, and have my boss publicly refer to my having provided an “inaccurate representation of facts” while reiterating the same information I clued our readers into, then that’s the price I was willing to pay.

Online, readers, including lots of celebrities, are mourning the loss of the site—or at least the version of the site that has existed for the past 14 years.

Queer Women Are Worthy. RIP @afterellen But big thanks for helping to elevate queer women and showcase queer talent. https://t.co/E3WanrpXlV

I'm old enough to have seen lesbian bars disappear, and online spaces like @afterellen are all we had left. What's going to fill this void?

OH COME ON. #afterellen is the first place I found coverage about women like me. This "bury your gays" hurts.

People also took to the comments of Kovacoglu’s post on AfterEllen to complain about Bendix’s termination and the direction of the site. Many people identifying themselves as regular freelancers also commented to say that Kovacoglu hasn’t contacted any of them to continue writing. 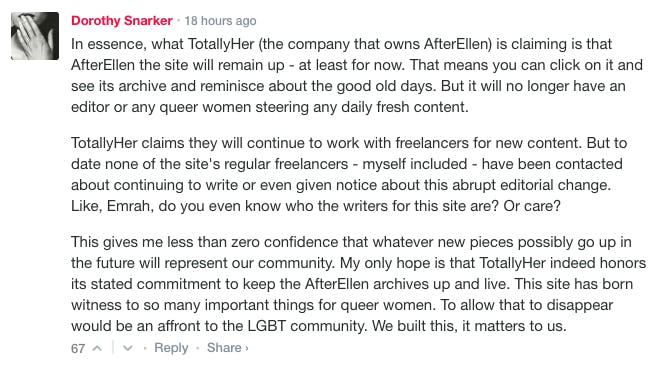 The Generosity campaign has a fundraising goal of $5,000, and promises to give any excess funds to “Autostraddle.com and, if applicable, other queer/lesbian media sites of the staff’s choosing.”