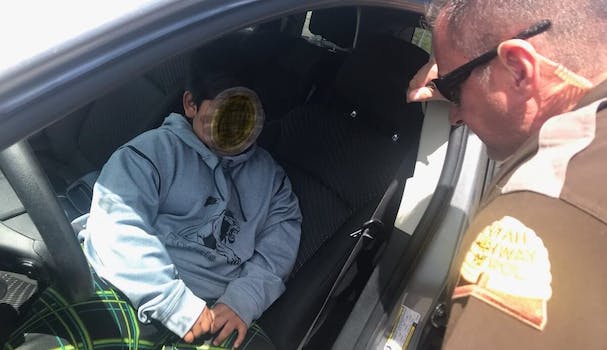 Utah police pulled over a five-year-old boy Monday who said he was driving to California to buy a Lamborghini.

A trooper initiated a traffic stop when he thought a swerving SUV on Interstate 15 was being driven by an impaired driver, according to a Utah Highway Patrol tweet.

Trooper Rick Morgan said it was clear when the SUV window rolled down that it was “a very underaged driver who was behind the wheel” and that the young boy sat at the edge of his seat in order to reach the brake pedal, USA Today reports.

Dash camera footage of the traffic stop shows Morgan pulling over the swerving vehicle and questioning the young boy.

In the video, Morgan asks the driver a series of questions about his age and family.

“How old are you? You’re 5 years old?” Morgan said in the footage. “Wow, ok. Where did you learn how to drive a car?”

The boy told Utah police that he was planning on buying a Lamborghini in California, according to a Utah Highway Patrol tweet.

“He might have been short on the purchase amount, Utah Highway Patrol tweeted. “As he only had $3 dollars in his wallet.”

The troopers contacted the parents of the child and they took custody of the boy and the vehicle, per USA Today.

Commenters on Utah Highway Patrol’s tweets called the boy “brave,” while some said that there is no way he is five.

Utah Highway Patrol did not immediately respond to the Daily Dot’s request for comment.