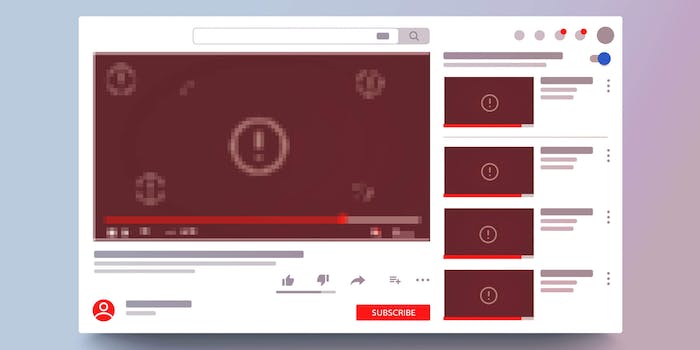 The event was forced to move locations at the last minute.

On Saturday, the Women of Sex Tech hosted its first virtual conference on the live streaming service Crowdcast. It was a last-minute switch that cost the organization “a couple hundred bucks,” organizers said. The night before, YouTube abruptly banned Women of Sex Tech from streaming the event in what the video platform now says was an automated reporting error.

This reporter attended nine panels part of the Women of Sex Tech Virtual Conference and found the event educational in nature with no graphic sexual content. None of the event material seen by the Daily Dot appeared to violate YouTube’s nudity and sexual content policies, which ban “explicit content meant to be sexually gratifying,” including pornography and nudity.

Women of Sex Tech President Alison Falk told the Daily Dot that at first, she “didn’t have any trouble” testing the stream. But on Friday, a test with the event’s first speaker was interrupted after four minutes.

“The video cut off saying that it had been removed for violating community guidelines,” Falk said. “I was so confused, I thought it had to be a glitch considering there was no mention of sex or adult content at that time.”

Falk tested the stream three more times with Vice President SX Noir, and on each attempt, YouTube found the account in violation of its community guidelines. The account was prevented from streaming for more than four minutes. No “sexual verbiage” was used in these test videos, Noir said in a Friday night email obtained by the Daily Dot. Each video test was unlisted, and thus no YouTube user could have flagged the organization’s videos.

“We don’t know what content violated [YouTube’s guidelines], we don’t know what happened, we have not heard any kind of clarification from YouTube,” Noir told the Daily Dot. “I think that’s part of the game that these big tech companies play. They leave you in the dark and they don’t have to explain to you what content violated Terms of Service, right? … We just figure, OK, yep, we’re talking about sex, so we won’t be able to use these major platforms everybody uses to connect.”

Women of Sex Tech initially began in 2015 as a private industry group and has since branched out to a community-building organization. The group is trans-inclusive, sex worker-centered, and sexually radical in its approach to the adult industry.

On Tuesday morning, YouTube confirmed to the Daily Dot that removals of the streams were false positives issued by YouTube’s automated content moderation system.

“We have made temporary adjustments to protect our extended workforce in response to COVID-19 that results in automated systems removing some content without human review,” a YouTube spokesperson told the Daily Dot. “We know that this may result in some videos being removed that do not violate our policies, but this allows us to continue to act quickly and protect our ecosystem. If creators think that their content was removed in error, they can appeal decisions and our teams will take a look.”

YouTube has since put protections in place to make an erroneous removal less likely for Women of Sex Tech’s YouTube channel. But mistrust remains a core issue for many sex workers, sex tech members, and pleasure activists operating outside the mainstream.

Women of Sex Tech’s community members often find their accounts are inexplicably deleted, refused advertisement, or not able to use payment processors, among many other issues, Falk said. The organization itself has had issues maintaining its presence on Facebook and said emails are regularly tossed into spam folders or simply disappear. It’s well-documented that sex workers, adult creators, and sex tech innovators have faced censorship on other social media platforms including Twitter, Patreon, Facebook, Instagram, Twitch, and Steam.

“We are grateful to have our account capabilities restored but it’s important that there is an acknowledgment of the frequency in which this happens to accounts who don’t have the privilege of Google investigating issues due to inquiries from the press,” Falk said in a follow-up statement to the Daily Dot. “What about all the accounts presenting on similar topics as we do that have been shadowbanned, demonetized, or have also had their videos ‘accidentally’ removed due to smart detection? Are those actually accidents?”