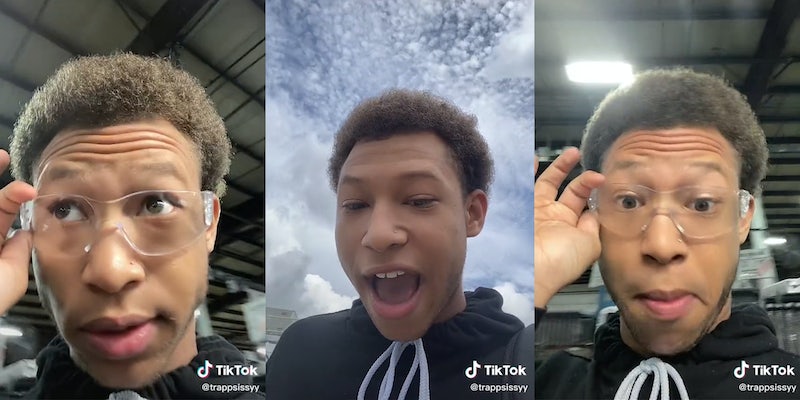 ‘Y’ALL THEY FIRED ME’: New worker puts manager on blast for not showing up to train him, gets fired

'They finna have a recall in a couple weeks.'

A TikToker’s light-hearted video calling out the person who was supposed to train him at his new job for not being there drew some attention on the platform—and may have gotten him fired.

“I only started this job two, three days ago,” Draco (@trappsissyy) tells viewers in a video posted in August. He looks around a warehouse and explains the person meant to train him that day didn’t seem to be there.

“And we make industrial heaters and fans,” he explains. “I’m finna fuck all these people’s shit up.”

The claim that he was going to have “the fans [blowing] heat and the heaters blowing dust,” as he wrote in the caption, was clearly interpreted by viewers as concern over not knowing what to do at work that day rather than a threat of any kind against the company.

“They finna have a recall in a couple weeks,” @most_hated_marcusgang joked.

“I probably would have blown the whole factory up,” @demare_04 chimed in.

Draco went about his work for the next two weeks, occasionally posting videos sharing his intention to learn everything he could about each department to become indispensable, as well as frustrations when he got stuck packing heaters because someone told him it was a job they needed men to do.

“Sometimes, women can do shit better than men can,” he theorized at the time.

At the end of the month, he shared a video laughing hysterically as he leaves the building.

“Y’all, I got fired again. They seen the TikTok video of me telling them I was about to fuck their shit up ,and they just went ahead and fired…” he trails off, continuing to laugh.

In a later video, Draco clarifies that he wasn’t explicitly told that he was being fired over a TikTok video but that the person who let him know he no longer had a job quoted it back at him, giving him reason enough to believe that was the case.

“I dead ass started cackling in this lady’s office. I mean, could not breathe, I’m on the floor rolling,” he recallls.

People getting fired over work-related TikToks isn’t exactly a new phenomenon compared to how long TikTok has been around, but employers and employees alike are still figuring out how best to navigate the use of social media as relates to work.

Like Draco, a lot of viewers found the whole thing funny but felt him getting fired over a video may have been out of bounds.

“I bet it was a coworker that snitched,” @brittneyy0308 suggested. “Thats why I block the people I work with.”

“If I had a $1 for every video I scroll by of somebody getting fired over a tiktok I swear I’ll be rich,” @aaliyahbrionna added.

Fortunately, Draco also updated viewers that he’s already gotten another job—and he’s posting TikToks from the breakroom only this time.

“Don’t ever let someone tell you that you’re young and need a job as an excuse to conform and take bullshit,” Draco said. “Life is too short don’t quit tomorrow quit today FUCK THAT JOB.”