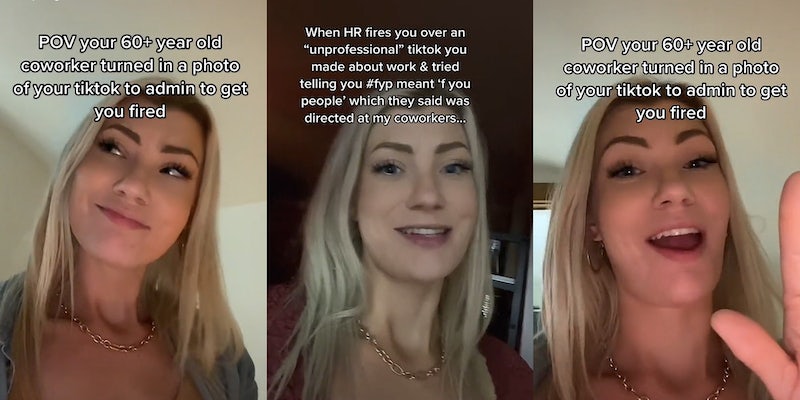 ‘Never tell a job your personal business. They always use it against you’: Woman says she was fired over a TikTok after her 60-year-old co-worker showed the TikTok to management

'The very first thing I do when I get a new job is find everyone's socials and block them.'

A 29-year-old woman on TikTok says her 60-year-old co-worker got her fired after turning in a photo of her TikTok to management.

Nicole Johnson (@nicoleybridget3) recently posted a series of TikTok videos breaking down the chain of events that led to her firing. As of Thursday, the original video went viral with more than 150,000 views.

“POV your 60+ year old coworker turned in a photo of your TikTok to admin to get you fired,” the video’s on-screen text says.

In a follow-up video, Johnson reveals the photo of the TikTok in question that almost got her fired. In the TikTok, which seems to have since been deleted, Johnson jokes about not being able to come into work early because she has kids, yet shows up to work with a Starbucks drink every day.

In her explanation video, Johnson clarifies that she did not say she was coming to work late — she only said she couldn’t come in early, which she and her coworkers were sometimes asked to do.

She says she only had that video up for a couple of days before making it private, which she usually does with her TikToks.

“I put this TikTok out there, didn’t even think anybody was going to do anything with it,” Johnson says in the video. “I didn’t think I’d get fired for it because I didn’t think it was unprofessional. It doesn’t swear, it’s not negative, it’s not harassing.”

Viewers said Johnson isn’t the only one getting reprimanded at work over their social media.

“My 1st year teaching an old teacher tried to get me fired by printing pics off my fb from when I was in college. Didn’t work,” one viewer commented.

“Seeing this right after getting reprimanded at work for a tiktok….” a second viewer commented.

“Same shit happened to me over a social media post about my vacation. Sorry that happened to you,” a third wrote.

However, several viewers are of the assumption that Johnson’s employer has been out to get her for a while. In another video, Johnson explains that she had been put on administrative leave for three weeks back in November 2021 for making “unprofessional TikToks” and for “harassment of a co-worker.” In the clip, she explains her co-worker turned in her TikTok after knowing Johnson had been on a “thin line.” The creator claims she had already expressed to management her struggles with ADHD and with being a single mom earlier this year, hoping they would accommodate her or cut her some slack. Ultimately, it seems the TikTok was the last straw as Johnson, despite being in a union, was fired in May of this year.

Johnson did not name her employer or the co-worker by name. The Daily Dot reached out to Johnson via TikTok comment.