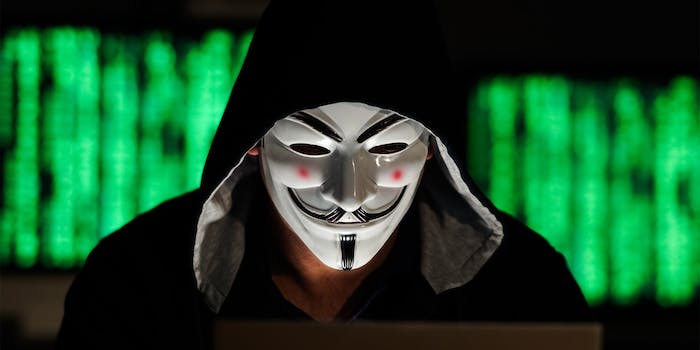 How @YourAnonCentral hijacked the news with fake stories

The account gained millions of followers after the hacking group began trending online.

Questions are being raised about a popular Twitter account claiming affiliation with Anonymous after the hacking collective went viral over the weekend.

Anonymous became a top trend on social media amid nationwide protests over the death of George Floyd after a video from a prominent Anonymous account threatened action against the Minneapolis Police Department.

The surge in interest for the movement led one Twitter account, @YourAnonCentral, to gain well over five million new followers in less than than a week.

The account has been active since 2011 and is one several large accounts related to Anonymous.

While many are now questioning if the profile is legitimate, the issue is more complex given the nature of the hacking collective.

Anonymous is not a group with a hierarchy or leadership. Anonymous is more akin to a movement. Even the emblem used to portray Anonymous, a headless man in a suit, is intended to convey its leaderless structure.

Even so, there are several accounts that have remained consistent and concise with their messaging for close to a decade.

One of them is the popular @YourAnonNews, which currently boasts more than 7.1 million followers after also gaining around five million new supporters over the last several days. The account has also been active on Twitter since 2011.

Yet @YourAnonCentral has managed to push its way to the forefront, with millions of Twitter users now seemingly believing it to be an authoritative source of secret knowledge.

But it’s provenance is extremely unclear.

The @YourAnonCentral profile deems itself the “official” account for the hacking collective despite such claims running contrary to the movement’s ethos.

And the account didn’t rise to prominence by leaking new data and information, at least not in the last week.

It was all old and made up.

The account gained traction in part by promoting numerous fake claims. Many of the false tweets and retweets have since been removed without correction, but can be seen on the Internet Archive.

One of the first claims pushed by @YourAnonCentral was that the Minneapolis Police Department had been hacked over the weekend. The account retweeted reports that officer’s emails and passwords had been leaked by the hacking collective.

But evidence indicates that isn’t what actually happened. Although several government-run websites in Minneapolis were hit with distributed denial-of-service attacks, an unsophisticated albeit effective tactic used to knock websites offline, claims of a hack are unfounded.

While a hack did eventually take place on the website for the Minneapolis Senate on Tuesday, the initial hacking claims that helped @YourAnonCentral gain new prominence were untrue. The actual hack, Senate officials said, granted intruders access to a file containing passwords used by politicians and staffers.

Analysis of the email addresses and passwords highlighted by @YourAnonCentral on Sunday show that the content did not originate from the Minneapolis Police Department or any other local government entity.

Troy Hunt, founder of Have I Been Pwned, a free service that notifies users if their credentials show up in data breaches, detailed in a blog post on Monday what was actually contained in the first alleged hack.

It appears someone, according to Hunt, merely searched for Minneapolis government email addresses in old and already public data breaches and compiled them into a new list. Passwords on the list also look to have originated from old breaches as well.

That wasn’t the only false claim. The account went on to retweet a now-deleted account alleging that Anonymous had just obtained and released personal information pertaining to President Donald Trump, including his Social Security Number (SSN) and phone number.

While Anonymous did reportedly leak Trump’s alleged SSN, the incident took place in 2016 prior to his presidency. The cellphone number had also already been published by Gawker in 2015, leading Trump that year to tweet out the digits as well.

The new wave of interest in Anonymous also seems to have caught the attention of scammers. Another Anonymous account that promoted the outdated Trump data, known as @AnonNewz, had actually been a fake K-Pop giveaway account just days prior.

As noted by computer security researcher Marcus Hutchins, known online as @MalwareTechBlog, the K-Pop-turned-Anonymous account was able to gain a large following in just hours. Twitter later told Reuters that it removed @AnonNewz for “spam and coordination with other spammy accounts.”

But once again, the data did not originate from Anonymous. The contents of Epstein’s address book have been public since being published by Gawker in 2015.

Other claims surrounding child abuse were also pushed by @YourAnonCentral. The account claimed that Anonymous had exposed Trump as a child rapist thanks to the leak of court documents surrounding allegations made on behalf of a 13-year-old girl.

At least some versions of the document circulating online are legitimate. Trump was, in fact, accused in a lawsuit of raping a young teenage girl. Once again, the documents as well as the allegations are not new and have been public since 2016.

The @YourAnonCentral account additionally stated on Sunday that the hackers had taken over the Chicago Police Department’s radio system to play “Fuck tha Police” by N.W.A.

The Daily Dot investigated the claim and confirmed that while the song was briefly played over a radio frequency use by the department, no evidence whatsoever indicates anyone alleging to represent Anonymous was responsible. Numerous songs and interruptions were overheard on the department’s emergency channels throughout the weekend and were later attributed to protesters.

The false claims didn’t stop there. Twitter users even quickly began spreading the rumor that Anonymous had leaked proof that Princess Diana had been murdered by the British Royal Family.

In reality, @YourAnonCentral merely tweeted a link to a 2002 article from the Guardian that, unsurprisingly, offered no such proof.

Old tweets from the account also resurfaced, showing @YourAnonCentral making disparaging comments about transgender people. The discovery led many who had initially praised the profile to question the account’s intentions.

The Daily Dot reached out to @YourAnonCentral to inquire about tweets and retweets made by the account but did not receive a reply. Other large Anonymous accounts did not return requests for comment as well.

Whether @YourAnonCentral purposely promoted false claims in order to boost the account’s followers or legitimately believed them to be true is unknown.

McGill University anthropology professor Gabriella Coleman, who wrote a widely-acclaimed book about the hacking collective, told the Daily Dot that many Anonymous accounts have switched owners over the years. Previous comments made by an account may not have come from current account holders.

The massive influx of new followers for major Anonymous accounts, however, may not just be the result of fictitious viral claims. A perfect storm of actual interest as well as “technical manipulation” designed to amplify Anonymous, Coleman added, may be responsible for their resurgence.

Coleman stated that inside sources alleged that major players who were prominent in Anonymous 10 years ago helped direct attention to the movement through bot accounts.

Given the current political divide and unprecedented situation the United States finds itself in, it’s not surprising that many would want to believe the fantastical claims circulating online, especially if some were artificially inflated. And when technical topics such as hacking become involved, the line between fact and fiction can blur even further.

As with any information, verification is always needed, even if it originates from an influential account that appears to portray an air of legitimacy.