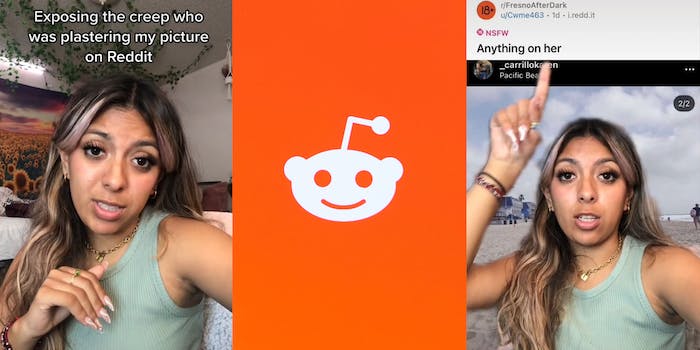 Woman exposes creep who plastered her photo on Reddit

'What he did was disgusting and if you can't see that you're just as sick as him.'

A woman revealed how she was able to track down a Reddit user who attempted to dig up information about her online.

In a video posted to TikTok on Wednesday, Karen Carrillo explains how a friend discovered her photograph was posted to a subreddit where users request information on women.

“The people on these communities go on here to find out girls’ information, like addresses, Instagram handles, social media handles, phone numbers, anything like that,” Carrillo says.

Carrillo says her friend, who frequents such communities in an effort to inform other women, followed up by sending a message to the Reddit user requesting his Snapchat username.

In order to confirm her suspicions, Carrillo says she responded to the Instagram message before convincing the user to give her his Snapchat handle. Yet when he did, the Snapchat username allegedly did not match the one her friend saw.

Assuming the redditor had multiple Snapchat accounts, Carrillo says her friend went on to ask the redditor for his Instagram handle. And sure enough, she says the Instagram account was the exact one that had been messaging Carrillo.

After discovering the link, Carrillo says she proceeded to block the user. Not only that, she says she later realized she was actually friends with the redditor in middle school.

“He was our softball manager and everything. That really only shows you that you really know people only so little,” she says. “That’s just fucking sick. Asking for girls’ info, posting their nudes, like we’re some kid of property or some shit.”

The Daily Dot reached out to Carrillo to inquire about the video but did not receive a response. The TikToker notes in the beginning of her video, however, that her aim was to inform other women of such online communities.

Users in the comments reported facing similar experiences as well, while others called on Carrillo to reach out to the Redditor’s college.

After one commenter attempted to defend the man’s behavior, Carrillo noted that the Redditor’s behavior was clearly unacceptable. The user even reportedly has a history of posting other women’s photos as well.

“What he did was disgusting and if you can’t see that, you’re just as sick as him,” she adds.