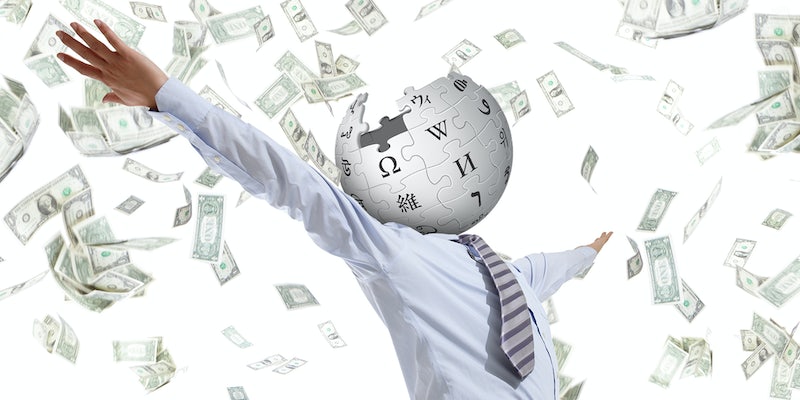 Wikipedia is swimming in money—why is it begging people to donate?

The site is way richer than it wants you to know.

The Wikimedia Foundation (WMF), the non-profit that owns Wikipedia and other volunteer-written websites, is about to reach its 10-year goal of creating a $100 million endowment five years earlier than it planned. Its total funds, which have risen by about $200 million over the past five years, now stand at around $300 million. Its revenue has risen every year. In just the first nine months of its current financial year, it has raked in $142 million in donations according to an internal document—and already obliterated its previous annual record.

This news may surprise donors and users around the world who have seen Wikipedia fundraising banners displayed at various times during the past year—including, for the first time, in India. Presently shown to readers in pandemic-ridden Latin America, these banners have created a widespread impression that the WMF must be struggling to keep Wikipedia up-and-running, with tearful-sounding messages like: “This Thursday Wikipedia really needs you. This is the 10th appeal we’ve shown you. 98% of our readers don’t give; they look the other way … We ask you, humbly, don’t scroll away.”

But keeping Wikipedia online is a task that the WMF could comfortably manage on $10 million a year, according to a casual 2013 estimate by Erik Möller, its VP of engineering and product development at the time. So what does the WMF do with all the money? It has used the funds to hire hundreds of additional staff and put money aside for a rainy day. It has ambitious plans to “become the essential infrastructure of the ecosystem of free knowledge.” And it is prepared to tell Wikipedia readers it really needs their money when it is richer than ever.

When the WMF announced the creation of an endowment with the Tides Foundation in January 2016, on Wikipedia’s 15th birthday, its goal was to accumulate $100 million over 10 years, as “a permanent source of funding to ensure Wikipedia thrives for generations to come.”

Just five years later, the endowment passed $90 million, and the $100 million mark, now described as an “initial goal,” will be reached this year. Major donations from Amazon, Google, Facebook, and others have been supplemented by legacy gifts—and $25 million from the WMF itself.

It’s noteworthy that money donated to the endowment is not included in the WMF’s reported net assets ($180 million as of last June) or annual revenue ($130 million). Money the WMF pays into the endowment, however, is recorded under expenditures (“Awards and Grants”). These two facts disguise that the WMF has effectively operated with a far larger surplus for the past five years than its financial statements indicate—they “only” show a $100 million increase in net assets over that time period. In reality, the WMF’s total funds have increased by twice as much.

The endowment is not the only money Wikimedia funnels to the Tides Foundation. Last year, when the WMF literally had more money than it knew what to do with, with community events canceled due to the pandemic, it transferred another $8.7 million to a new “Tides Advocacy” fund.

Moreover, the WMF is launching a for-profit company named Wikimedia, LLC. This will sell API services to big tech companies, making it easier for them to process Wikimedia content, which powers voice assistants like Apple’s Siri and Amazon’s Alexa as well as Google’s infoboxes. These smart internet of things devices all draw on content from Wikipedia to create their aura of omniscience.

The Wikimedia, LLC project fills many of Wikipedia’s volunteer writers with unease. They see profits as a potentially corrupting influence. And there’s a perceived inequality in WMF staff being paid, while volunteers work for free. Wikipedia has been built with around 3 billion individual “edits.” The average edit currently brings the WMF around 4.3 cents in annual revenue, and now far greater profits to big tech. Wikipedians who have made hundreds of thousands of edits may well feel someone else is enjoying the fruit of their labor.

From a reader’s perspective, the WMF’s wealth has little changed Wikipedia’s look and feel. A time traveler from 2007—the year Wikipedia became a global top-10 website—might not notice much difference. But the WMF itself has changed beyond recognition. In 2007 the organization had 11 employees and expenses of $2 million.

Fast forward to 2021, and the WMF’s job advertisement looking for a successor to CEO Katherine Maher—who left in April—says the WMF employs a team of over 500. Top-tier managers earn $300,000 – $400,000 a year. Over 40 people work exclusively on fundraising. Today’s banners count how often the reader has seen them (“Hi, reader in Canada, it seems you use Wikipedia a lot; that’s great! It’s awkward, but this Tuesday we need your help. This is the 10th appeal we’ve shown you …”), and plead with them to “Please don’t scroll away”—a phrase that’s proved surprisingly effective in A/B testing. Last December, readers dismissing the banner were shown a weeping emoji.

The WMF emphasizes time and again that Wikipedia never tries to sell the public anything. But its own fundraising banners have been described as ads that say “We’ll never run ads.”

This is a major aspect of the WMF’s PR work. In April, during her last week at the WMF, outgoing WMF CEO Katherine Maher was interviewed on the Daily Show with Trevor Noah. (The wife of the WMF’s PR consultant, the Clinton Foundation’s Craig Minassian, works on the show as a producer.)

In the interview, Noah put it to Maher that the downside of being a non-profit is that “you often struggle to have enough money to keep Wikipedia up and running. So, two parts. One, is that true and how does it affect you, and then, two, why would you make this thing if it’s not going to make you money?”

Maher’s cheerful answer made no reference to the WMF’s vast money reserves, but emphasised that Wikipedia’s lack of ads was responsible for the site being so trusted today.

Just after its embarrassment of riches last summer, the WMF started its first ever fundraising campaign in India, suggesting readers donate 150 Rupees ($2) each. Banners saying “Wikipedia really needs you,” “We need you to make a donation to protect Wikipedia’s independence,” “Help us keep Wikipedia online and growing,” caused fears in India that Wikipedia was dying or might put up a paywall.

Wikipedians have long been dismayed by these fundraising banners. Wikipedia is supposed to be “The Free Encyclopedia,” not the one that makes its readers feel guilty. Wikipedia has never been at risk of going offline, needing advertisements, or losing its independence. Every year the WMF has taken more money than the year before, and expanded its staff.

This year is no exception. In the first three quarters of the WMF’s current 2020-2021 fiscal year, the combined year goal for the Wikimedia Endowment and the Foundation was exceeded and raised from $108 million to $125 million. This goal too had been exceeded by the end of March, by a full $17 million. Yet a few weeks later, the WMF began fundraising in pandemic-ravaged South America, asking readers “humbly” to donate money “to defend Wikipedia’s independence” and “tell the volunteers that their work matters.” (Some of those volunteers are not amused.)

The WMF’s financial independence is clearly not at any risk. So what is going on? The official answer is that the WMF thinks you can never have too much money put aside for a rainy day. The WMF also has high-flying, global plans to “become the essential infrastructure of the ecosystem of free knowledge” by 2030. It says it wants to create “knowledge equity”—a world where people everywhere will have as much access to information in their own language as a first-world citizen—and that this will require continuous budget increases. In all of these endeavors, it is aided by the discovery that it has a money tap in Wikipedia, built through the work of volunteers, that it can open whenever it pleases.

And thus the people in pandemic-stricken countries like Argentina and Uruguay, many of whom will today be fearing for their and their loved ones’ lives and livelihoods, are told that the WMF really needs a donation from them today, to protect Wikipedia’s independence.

Perhaps they shouldn’t be seeing those appeals at all.

Andreas Kolbe is a former co-editor-in-chief of The Signpost, Wikipedia's community newspaper. He has also written for The Register.