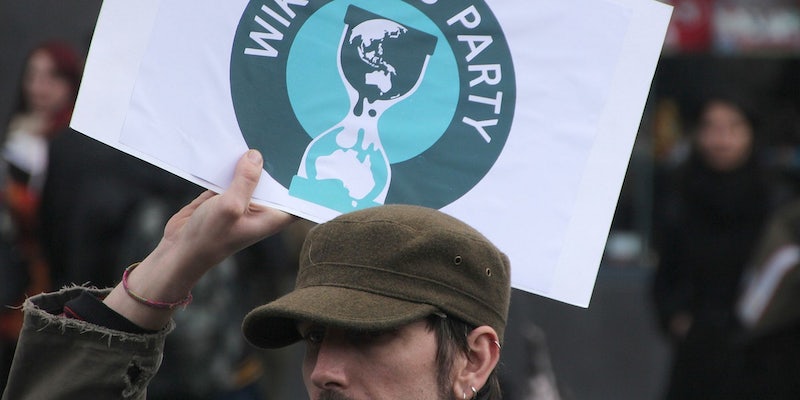 WikiLeaks is trying to distance itself from the WikiLeaks Australian Citizens Alliance.

WikiLeaks Australian Citizens Alliance bills itself as “one of the oldest and most active WikiLeaks support groups” on the continent, established in “response to the Australian Government’s hostility towards WikiLeaks and our government’s complicity in the United States of America’s continued agenda to criminalise Julian Assange and the work of WikiLeaks.”

According to Assange et al., however, the organization is something entirely different:

Australia: A front group, “akaWACA” fasely claims to be a support group for WikiLeaks. It is not endorsed and exists for its own reasons.

In fact, WikiLeaks has gone so far as to demand that WACA cease using its name, logo, and even Assange’s name, asserting that they are all “registered trademarks.”

@akaWACA Please remove the word “WikiLeaks” from your name and all misleading uses of the WikiLeaks logo and logotype.

@akaWACA Yes. WikiLeaks is a publisher. It and Mr; Assange are registered trademarks in order to stop opportunistic misrepresentation.

Neither “WikiLeaks” nor “Mr. Assange” is a registered trademark in Australia at the moment—though it’s not as if Assange hasn’t tried to secure his name before. You can apply for the Australian rights to either for just $299.

In the meantime, observers are struggling to frame the dispute between WikiLeaks and this branch of supporters. The original friction appears to have been over Australia’s WikiLeaks Party, which nominated Assange for a Senate seat and fared poorly in a recent election. On Aug. 21, WACA posted the resignation letters of its prominent members from the party. Dr. Leslie Cannold, like many others, expressed disappointment with a quickly corrupted organization that might have challenged Australia’s two-party system:

“As long as I believed there was a chance that democracy, transparency and accountability could prevail in the party I was willing to stay on and fight for it. But where a party member makes a bid to subvert the party’s own processes, asking others to join in a secret, alternative power centre that subverts the properly constituted one, nothing makes sense anymore. This is an unacceptable mode of operation for any organization but even more so for an organization explicitly committed to democracy, transparency and accountability.”

WACA went on to quote Assange’s mother, Christine Assange, on the failure of the WikiLeaks Party and how she had left Twitter as an act of defiance. WACA also strongly implied that John Shipton, Assange’s biological father and an instrumental part of the party, was responsible for its failures and subsequent disillusionment.

(22) I closed my account in protest re #WikileaksParty execs abuse of power & failure to be held to account.Christine #Assange #WikiLeaks

@wikileaks we support YOU and the work of WikiLeaks, YOU came to me to get involved in the party and your father screwed many people over

At issue now seems to be whether WACA is “allowed” to support WikiLeaks without holding fast to the associated political party. Clearly, the group thinks that’s not unreasonable.

@Hanissee not interested in the party at ALL, we are interested in our future and our kids future. Protecting whistleblowers and real change

Inevitably, WikiLeaks supporters began taking sides, with some labeling WACA opportunist and others suggesting Assange was cutting his own nose by taking the offensive against his own cheerleaders. Either way, the schism is a black eye for a movement that has often struggled for the unity they find among oppressive and hegemonic world powers.