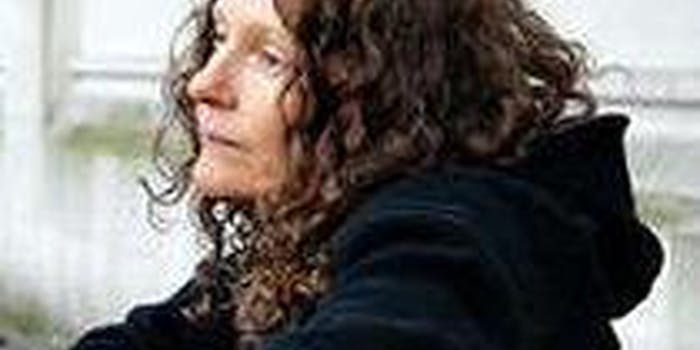 Christine Assange takes to Twitter to defend her famous son. Those who have dealt with her are not likely to forget the experience.

It’s one woman with a cellphone against the governments of the United Kingdom, Sweden, and the United States.

Oh, and Australia, when she has the time.

Bet on the mom.

Christine Assange is a mother with a mission: keeping her kid out of prison.

Julian Assange, founder of Wikileaks, recovering hacker, chick magnet, America’s Most Wanted, Sweden’s Most Wanted, Interpol’s Most Wanted, Australia’s most decorated new media journalist, and, apparently, Least Wanted Citizen, has yet to be charged with any crime in any country, although he’s been in house custody for over a year and is still fighting extradition to Sweden.

All of which his mother is at pains to clarify over the course of two hour-long phone calls.

Abandoned by the mainstream media by her own account, in the last five weeks Christine Assange has taken to the Internet to put the word out about her son’s case, 4,200 tweets worth and counting.

“I got Twitter specifically because the mainstream media wasn’t doing the Truth,” she said.

Not that she isn’t media-savvy herself. As she explains, “Twitter is getting facts out in soundbites.”

Tweeting links, beating back rumors, correcting mistakes, and asking for input, fearlessly putting her Gmail address out there, she has surely worn all the shine off the Send button by now, and she’s done it all entirely without a computer. Asked about her son’s hacker skills, she says, “I don’t know where he got it, really. Not from me. Not his father either.

“I very much dislike computers. I am only using them to help my son. I’m an artistic person and I like drawing, modeling and painting.

“But Twitter is something that I like because I can be creative with it as well. It doesn’t take much to get a message out and get responses back. I find it gratifying to use because I can have direct connection with the People. And the People are who supports Julian: not the governments. This is who he’s doing it for—this is where I feel most comfortable communicating.

“I answer their questions, and also find out who is supporting WikiLeaks; making contact and helping them make contact with each other, exchange ideas and disseminate information. Not everyone belongs to WikiLeaks groups. Some are very supportive of WikiLeaks individually, but don’t want to join the group or haven’t got time.”

Another thing she likes is the way Twitter crosses borders.

“I can talk to people all over the world: different nationalities, age groups, allegiances, all of whom have one thing in common, an interest in truth, WikiLeaks, democracy, free press in protecting democracies. What is happening to Julian and WikiLeaks is wrong and jeopardizing the above. It’s a great way to transcend other differences.”

She’s not at all shy, so reaching out is easier for her than for some people, particularly since she’s got this crusade going on, and some degree of moral imperative, being a parent.

“It’s just who I am naturally; I’m not a public figure. I’m only in public because I’m Julian’s mother. You win people over one at a time. These people are making efforts: that should be acknowledged. Through the fact we’re having exchanges (as is natural) you are connected more to some, than others, and then you contact them privately off Twitter and then build networks outside of cyberspace. I have made some very good allies, very, very talented people through Twitter.”

The campaign does have its compensations.

“People on Twitter have a wicked sense of humor, which I need at the moment. Intelligent, witty people, whose cyber-company I enjoy within the battle. It’s good practice when I’ve got trolls.”

The point at which people find themselves getting trolled is the point at which most people pack it in, shrieking they’ll never go online again. And those are just ordinary trolls, not possible-government-agent trolls, crime trolls, fangirl trolls, politics trolls.

But this is not some shrinking violet; this is a woman with a plan for troll management.

“I practice with the trolls for the interviews. I think journalists are nicer than trolls,” she assures me, laughing again. “It sharpens me up for interviews. The trolls try to discredit me and Julian. By answering them factually, they’re my devil’s advocate. They’re asking some of the questions many of the people who are watching have. I use them and they’ve been warned they’ve been used for information dissemination.  And when they reach their use-by date they’re terminated.”

At moments like this it is possible to see where Julian gets the Bond-villain side of his character.

“They just send me a new troll. I have looked inside the boxes of trolls for why they’re so aggressive and verbally vicious. I have interestingly found that the majority of them come from the Liberal party or the Labour party. Not the Greens. Overseas I don’t know. They’re connected to political parties who would like to see my mouth shut and me discredited. I fight their foolishness with facts.”

Editor’s note: Please see the correction below about this quote.

“No matter how vicious they get I will turn it around to piggyback my facts on their abuse. I’ll get it out to my X number of followers who are watching because they enjoy a bit of sparring, and also to their followers as well, so they’re publicizing it among their own community.”

She’s also not afraid of the more questionable elements of social media, including saboteurs.

After our first interview, my computer died. I thought I was a victim of a bad PC. She, on the other hand, suggested—jokingly perhaps—that there were more nefarious issues involved than an aging computer.

“You interviewed me and your computer died?” she chuckled.  “Oh, funny that, isn’t it? How’d that happen, I wonder? That was a good interview, too, one they would not want out.”

But Assange is not phased by paranoia-making hardware failures; it’s all in a day’s work.

Given our surveillance society, and a natural aversion to computing, how did she come to decide Twitter was worthwhile in the first place? Like most converts, she had been a lurker, watching the stream without taking part, not thinking it particularly important.

That changed just over a year ago.

“I got on one day and a lot of tweets were coming in from Egypt, from Tahrir Square. They were tweeting, ‘Cops are here, they’re taking our cameras.’  All different people all around the square tweeting at the same time independently. They were saying things like, ‘they’re shooting, hitting reporters, taking their cameras.’ And on the news that night [in contrast] it was reported that the cops had been called in to quell disturbances in Tahrir Square. It was the same with Occupy Wall Street. I was just watching from the outside; it was two weeks before it was reported in the media here!

Speaking of uncensored, it wouldn’t be fair to post this interview without letting her make her case, even if the interview’s more about the medium than the message.

Summing up the three main points of her crusade, she starts with:

In contrast to her opinion on certain Swedish feminists, she praises Julian’s lawyers in a tweet:

She’s not quite so fond of the Australian government, which has been noticeably quiet about the battle over one of its most prominent citizens.

Any woman who can unleash alliteration like that is not a woman to be crossed lightly. The campaign, while serious, has been invigorating for the 60-year-old Assange.

“I’ve joined the young people, because I get my stuff on Twitter. Twitter has a lot of good people, people who really care about the world, and good citizen journalists too.”

She’s pretty good with Twitter, but when it comes to handling the media, she’s awesome with flattery.

Correction: Although our reporter recorded her interview with Christine Assange, while transcribing the recording, she misheard “I fight their foolishness with facts” as “I fight their dirty mouths with sex.” After reviewing the tape, we have corrected the text to reflect Assange’s actual words. The Daily Dot regrets the error.