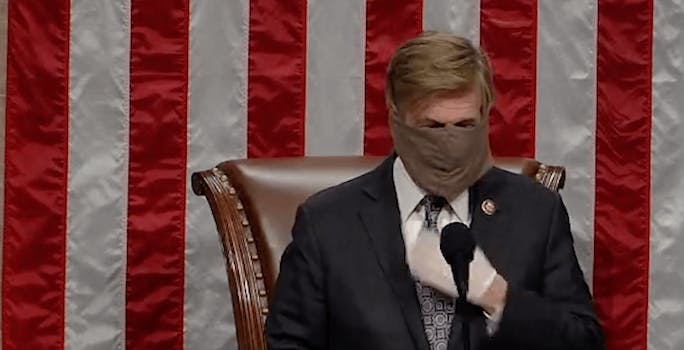 None of them know what they are doing.

Over the past few weeks, Americans nearly everywhere have been told they need to be wearing masks in order to keep ourselves and our fellow citizens safe from the coronavirus.

And when Congress came back into town to work through a coronavirus stimulus package, they came wearing masks.

But the face gear requirement, like most things in Washington, became a partisan divide.

Most of the Republicans ignored that rule, like Rep. Jim Jordan (R-Ohio), who appeared on the floor of the House of Representatives maskless and coughing into his elbow.

Among those members of Congress who have donned masks on the Hill, some have done it better than others.

Undoubtedly, the worst attempt at wearing a mask goes to Rep. Don Beyer (D-Va.). Beyer’s appearance in a mask wrapped around the front of his face and covering only his nose was lampooned by Congressional Scheduler, a Washington meme account with a small but dedicated following of Capitol Hill staffers.

But Beyer’s bizarre display of how not to wear a mask is only made more strange by the fact that only two weeks ago, he wore perhaps the most badass mask on Capitol Hill.

Beyer said that his daughter made him his previous mask and that it has coffee filters inside.

While handling the gavel on April 10, Beyer looked like he’d just stepped right out of Red Dead Redemption. Or Watchmen.

There were other examples of masks worn just short of properly, like this from Rep. Angie Craig (D-Minn.). While Craig has the basic idea down, the CDC illustrations all have the mask covering the face.

But some members of Congress did a decent job with it, like Rep. Jim McGovern (D-Mass.) who sported a Patriots mask.

Or Rep. Debbie Wasserman (D-Fla.), who wore a mask emblazoned with the University of Florida logo.

One of the few Republicans who bothered to wear a mask was Rep. Tom Cole (R-Okla.).

And some apparently felt there was no such thing as being too prepared, like freshman Rep. Jimmy Gomez (D-Calif.), who wore two masks on the floor and spoke through both of them the entire time.

Gomez was one of the few members of Congress who spoke through their mask when he was given time on the floor. Many congresspeople wore masks to the microphone and then took them off so that their arguments wouldn’t be muffled.

House Minority Leader Steny Hoyer (D-Md.), who wore a mask with a black-and-white design, and who has an emphatic debate style, was among those who approached the microphone with a mask then took it off.

The award for most patriotic goes to Rep. Al Green (D-Texas), who sported a mask with the American flags across it.

House Speaker Nancy Pelosi (D-Calif.) adopted a more Western look and was photographed trudging through the Capitol Hill hallways, looking like she was about to join a shoot-out at the OK Corral.

But the best mask on the floor of the House last week went not to a member of Congress, but to House Chaplain Pat Conroy, who appeared to have bundled the bottom half of his head in a blanket.

While it might seem bizarre to care about something as unremarkable as members of Congress in masks, we will look back on these recent sessions and remember how unique and strange this moment really is.