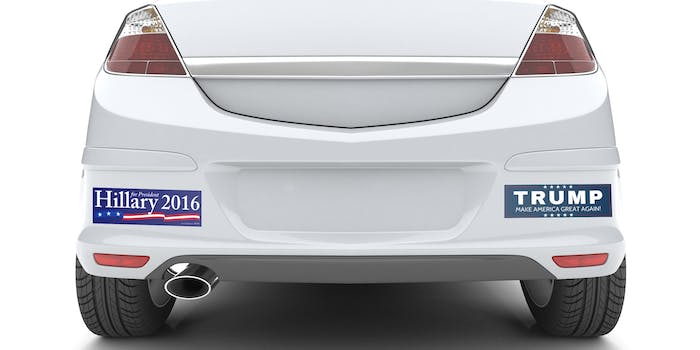 State-by-state break down: Where Trump or Clinton is winning

Major poll of 50 states gives us a detailed look at the 2016 political landscape.

September will be a make-or-break month for the 2016 presidential election.

The race between Hillary Clinton and Donald Trump—which, for much of August, was deemed Clinton’s to lose—is getting tighter once again, according to a new group of polls released the Tuesday after Labor Day weekend.

A mix of good publicity (Trump’s visit to Mexico, Clinton’s speech against the alt-right) and bad publicity (pressures on the Clinton Foundation, Trump’s donation to Florida Attorney General Pam Bondi) may have evened up the score.

A new CNN/ORC poll indicates Trump is leading Clinton by two points among likely voters, while Clinton is ahead by three points among registered voters. With a margin of error of plus or minus 3.5 points, this survey puts the leading candidates in a virtual tie. The Real Clear Politics average of polls still indicate that Clinton is leading by more than three points in a head-to-head matchup against her Republican opponent. It’s still a far cry from the eight-point lead Clinton had back in mid-August, in the days following the Democratic National Convention.

But the Democratic nominee may have the advantage when the Electoral College is concerned. A Washington Post/SurveyMonkey poll of 50 states released on Tuesday shows Trump is losing or in a dead heat with Clinton in more than a few “safe” red states. Trump is behind Clinton by one point in Arizona and Texas, both Republican strongholds that also happen to have large Hispanic populations.

The idea of both border states becoming election battlegrounds could be a foreboding sign for Trump’s most popular and controversial policy to date: the border wall. Clinton has a 14-point lead in New Mexico, another border state, which voted for a Democratic president in five of the last seven elections. Trump’s heated immigration rhetoric reached a new level of seriousness in an address he gave last week in Arizona. Hours after a cordial meeting with Mexico’s president, Enrique Peña Nieto, the Republican presidential contender promised in a fiery speech to deport all undocumented immigrants living in the U.S. illegally.

It’s hardly smooth sailing for Clinton from here on out, however, especially since it’s gotten a little too close for comfort in key swing states.

Clinton is leading Trump in Colorado and Florida, though only by a middling two points, according to the Post/Survey Monkey poll. Meanwhile, the survey shows Trump leading Clinton in Ohio but only by a nominal three points. On average, however, Clinton remains ahead by slim margins in both states.

As the old adage goes, no Republican since Abraham Lincoln has won the presidency without carrying Ohio, and no Democratic president has won the presidency while losing Ohio (with the exception of Franklin Delano Roosevelt and John F. Kennedy Jr.). Still, Clinton’s success in Ohio and/or Florida may not even be critical, given that she sustains an eight-point lead over Trump in Virginia.

Furthermore, Trump’s courting of black voters may not be paying off in Southern states with large African-American populations. Trump is tied with Clinton in Georgia and is only ahead by two points in Mississippi.

Trump is clobbering Clinton in the state where she once served as first lady, Arkansas, where the former reality TV star holds a 13-point lead. This is nothing new. Trump had an 11-point lead in Arkansas the last time a state-wide poll was released in June.

If you only count the 20 states where Clinton leads by four or more points, she garners a total of 244 electoral votes. That’s 26 fewer than the 270 she will need to win. This means that, of the six toss-up states where she is in the lead, she would either need to win Florida (29 electoral college votes), Texas (38 electoral college votes), or any of the two smaller states (Arizona, Wisconsin, Michigan, Colorado) to win the presidency.

Though Trump is leading by four or more points in the same number of states as Clinton, he is even further behind, with a total of 126 electoral votes. Trump’s immense popularity in the sparsely populated rural South and Upper Midwest proves to be a drawback here.

All that being said, the Washington Post/Survey Monkey poll is only one poll—its findings in Texas, for example, may be far off base—and we still have roughly 60 days to go until Election Day. Still, the survey provides the most comprehensive polling data of all 50 states we have available. The poll’s findings are consistent with the most recent state polls that were released through August. Below is a quick breakdown of the states where Clinton and Trump are leading, respectively, according to the Washington Post/Survey Monkey poll. If text is more your thing, here are the states in which Trump is leading by four or more points:

Here are the states in which Clinton is leading by four or more points:

Here are the toss-ups:

Editor’s note: The Washington Post/Survey Monkey poll offers outlier findings in some states, particularly in Texas, where most poll averages have Trump leading. The TPM polling tracker has Trump up by 16 points.