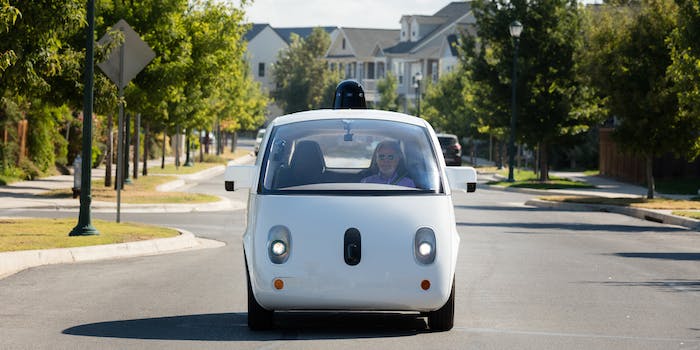 Waymo’s self-driving fleet could hit the streets this month

Phoenix-area residents will be first to try it out.

Waymo is preparing to launch a fleet of self-driving, ride-sharing vehicles as early as this month.

According to a report from the Information, despite some internal drama, the Alphabet-owned self-driving car company is gearing up to launch a ride-sharing service. Waymo will debut it first in Phoenix, where it’s been giving free test rides to residents since April as part of a beta program. Waymo’s current fleet includes 100 Chrysler Pacifica minivans outfitted with a variety of custom systems and external sensors.

To facilitate its ride-hailing service, Lyft and Waymo announced a partnership together back in May.

“Lyft’s vision and commitment to improving the way cities move will help Waymo’s self-driving technology reach more people, in more places,” Waymo said in a statement at the time.

Alphabet chiefs Larry Page and Sergey Brin wanted Waymo to launch a completely autonomous ride-sharing service back in 2016. Waymo engineers convinced the duo that this goal was unreasonable and that for safety, drivers were still needed. With humans available to take over at the wheel, its vehicles could go on longer rides, to locations not yet mapped by the company. The Lyft partnership addresses this issue.

Lyft competitor Uber has also been testing driverless cars as part of its own ride-hailing services. However, that whole endeavor has been embroiled in a legal battle with Waymo. Waymo alleges that its former employee Anthony Levandowski stole proprietary information from Google before jumping ship to form his own startup, Otto. Uber then acquired Otto to speed up its own self-driving car efforts. In a due diligence report made public today, it’s clear that Uber knew Levandowski had Google trade secrets (in the form of thousands of files) before putting him in charge of its autonomous car program.

Both Waymo and Uber have been fighting to become first to market with an autonomous ride-sharing service.