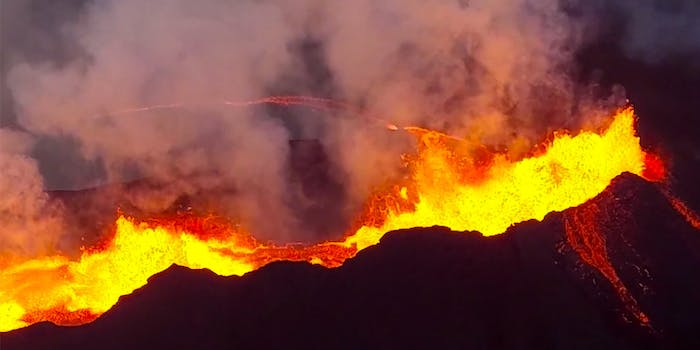 GoPro strapped to drone melts after flying into an active volcano

Ever speculated as to what the inside of an erupting volcano looks like? Well wonder no longer, because drone manufacturer DJI has put together a video with the assistance of quadcopter Eric Cheng that really does get up close and personal with one of nature’s most powerful phenomena.

Enduring temperatures so hot the GoPro camera strapped to the drone actually melted, we’re given an awe-inspiring look at the cauldron of molten lava at the heart of Bárðarbunga volcano in Iceland.

Sure, it may just be a glorified advert for DJI’s Phantom drones—but that doesn’t make it any less impressive. At the same time, however, we can’t help but feel like DJI has been one-upped slightly by Sam Cossman and George Kourounis. Adrenaline junkies without parallel, the duo attached GoPro cameras to their heads—and then dove into an active volcano.

I think that’s one thrill-seeking excursion I’m going to have to sit out.