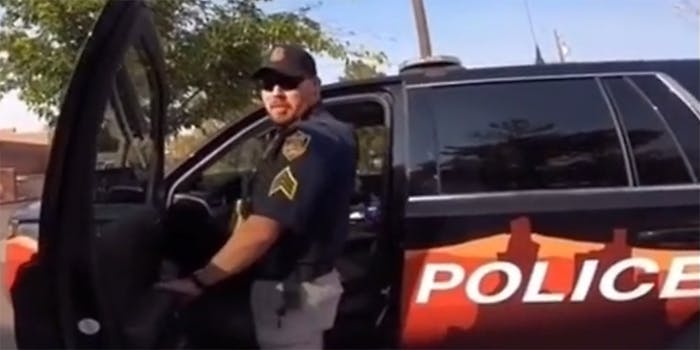 TikToker OurRightsMatter714 has racked up millions of views in mere days.

A TikTok account dedicated to police getting schooled on individuals’ civil rights has gone massively viral. OurRightsMatter714’s first TikTok is dated just July 11. The account now has 3 million likes and more than 100,000 followers.

Several of OurRightsMatter714’s TikToks have millions of views. One has been watched 10.6 million times.

In the above TikTok, an officer approaches a man filming outside a police facility. He asks for his license. The man refuses.

“You know you can’t ask for that unless I’m committing a crime, man. What’s wrong with you,” the man says.

He tells the officer he’s doing a story on the police and to go get a supervisor or arrest him.

“I’m keeping you accountable. I’m here to make sure you’re doing your job and right now you’re about to violate my civil rights because you’re detaining me and I’m not doing anything criminal.”

“Thank you, sir, have a good day,” the officer responds.

The TikToks OurRightsMatter714 posts appear to come from various sources, locations and feature different people. Filming the police is a popular pastime in some states, as the Daily Dot reported years ago. Many run a similar course: People film police and police facilities from public property; when cops approach and ask for ID or demand they stop filming, they refuse and cite the law or ask what law they’re breaking.

Typically, the officer eventually gives up. Sometimes they summon a superior, only to be informed that it’s perfectly legal to film the police from public property and that people don’t have to provide ID unless they’re suspected of a crime.

In one such TikTok, a man initially refuses to provide ID, then agrees. But instead of a license, he pulls out foam letters “I” and “D.” The officer is unamused, but lets him go.

Cops in some of the TikToks refer to police vehicles and property as theirs, and are promptly corrected. “This is my car. This is a city vehicle. It is not your car,” a man tells an officer in one.

In other TikToks, people ask police the same “silly questions they ask us,” like whether they’re carrying drugs or illegal firearms.

Most of the TikToks feature peaceful, at times mildly confrontational, exchanges. But in one harrowing video, an officer points a gun at the man holding the camera. The man, who appears to be a person of color, is sitting behind the wheel of a vehicle. As he repeatedly insists he’s done nothing wrong, the officer keeps the gun on him and a finger on the trigger. He finally drops the weapon upon the urging of other officers.

OurRightsMatter714 says that the “aggressive officer” was fired after this incident.

Reactions to OurRightsMatter714’s account have been mixed. Some feel that the people filming the cops are being unnecessarily provocative.

“I hate people like you honestly you just piss them off just let them be,” user Joseph Zuppe commented on the TikTok where a man tells a cop that the patrol car belongs to the people, not him.

“Hope they walk away when you guys really need them,” user Tequilero commented on another TikTok.

More people seem amused and gratified by OurRightsMatter714’s account, however. They feel that the TikToks expose how officers abuse their authority, mistreat, and brutalize the public.

“They think they can do whatever they want to do! Fools!” a TikToker commented on a video in which a superior officer tells another cop that the person filming isn’t doing anything wrong.

For decades, people have complained about police violating their rights, particularly persons of color and the poor. Last summer saw the largest wave of civil rights protests since the 1960s.

The protests were inspired by several videos of police killings and brutality, primarily that of George Floyd. Floyd died after now-former Minneapolis police officer Derek Chauvin knelt on his neck for nearly nine minutes. Chauvin was convicted of Floyd’s murder.

OurRightsMatter714’s account, and the reactions to it, show that people aren’t backing down from demands such as greater police accountability, oversight, and respect for their rights. And they’re not going to stop filming, either.

OurRightsMatter714 declined to comment on this story without receiving compensation, the Daily Dot does not offer money for interviews.