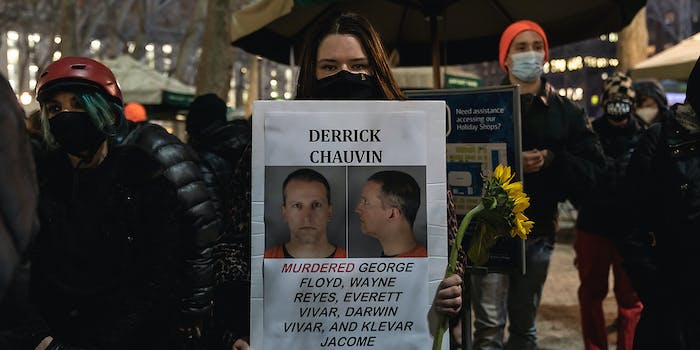 'The jury got it wrong, I believe.'

A former longtime officer for the Minneapolis Police Department, speaking condition of anonymity, says he was surprised by former officer Derek Chauvin’s conviction and called it a “tragedy.”

In an exclusive with Insider, the anonymous officer spoke with the outlet less than 24 hours after Chauvin’s conviction for killing George Floyd, a Black man, who was being arrested for using a fake $20 bill at a Minneapolis convenience store. Floyd’s death charged protests worldwide and has helped set forth numerous police reform initiatives. The former officer, on Chauvin’s behalf, doesn’t consider the verdict just.

“The jury got it wrong, I believe. But you gotta respect [the jury’s] decision,” the former officer said.

The former officer, talking previously to Insider, believed Floyd died of a fentanyl overdose. Experts, however, testified that a lack of oxygen caused Floyd’s death due to Chauvin’s pressure on his neck.

Now, the former officer and others believe Chauvin wasn’t treated fairly and see the conviction as a precursor for things to come. He says one of the officers described Chauvin as a “sacrificial lamb.”

“They all believe that Derek didn’t stand a chance at a fair trial,” he said.

The former officer told Insider he was he surprised at how swiftly the verdict arrived.

“When they came back that quick, I knew he was screwed. I knew it,” he said to Insider. “I’ve never seen, in all my years of work, a jury comes back that quick on such serious charges. Never.”

He believed the jury “was under tremendous pressure to ‘make it right for George Floyd.'”

It appears his more pressing concern is the conviction being used as a legal and moral precedent for future cases. Tou Thao, Thomas Lane, and J. Alexander Kueng, the other officers on the scene of Floyd’s death, are all set to be tried in their respective cases later this year.

“It’s the new trend now. They’re sending cops to prison,” he said, suggesting that police officers convicted of brutality are being persecuted.

“The whole thing is just sad. It’s really upsetting to me,” the former officer stated. “It’s a lose-lose deal for everybody.”