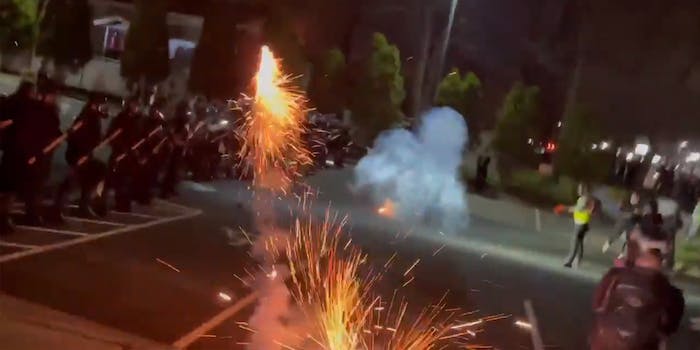 Protests erupted in a Minnesota city last night following the death of a 20-year-old Black man, whom his family says was shot by police before getting into his car and crashing several blocks away.

Daunte Wright died at a traffic stop in Brooklyn Center, Minnesota, just 10 miles from Minneapolis, where former police officer Derek Chauvin is in the middle of a trial and charged with murder and manslaughter for his role in the death of George Floyd last May.

The Brooklyn Center Police Department said in a Sunday statement that officers initiated a traffic stop around 2pm for “a traffic violation.” Police said they determined Wright had an outstanding warrant and tried to take him into custody. They said Wright then re-entered his vehicle, at which point an officer shot him.

Wright’s mother, Katie Wright, told the New York Times that her son called her as he was being pulled over “because he had air fresheners hanging from his rearview mirror.” Her account of the shooting also differed from the police statement, as she claimed cops shot her son before he re-entered his car.

Minnesota Gov. Tim Walz (D) tweeted last night that he was “praying for Daunte Wright’s family as our state mourns another life of a Black man taken by law enforcement.”

Following the shooting, protesters gathered near the scene, waving “Black Lives Matter” flags and signs and writing “Justice for Daunte Wright” on the sidewalk in chalk, the Associated Press reports. Other demonstrators jumped on top of police cars, confronted officers, and threw rocks at the Brooklyn Center Police Department building. The protests carried over into the early hours of Monday morning.

Twitter users unsurprisingly criticized the Brooklyn Center police en masse for shooting Wright and lamented the frequent killings of Black people at the hands of police.

“There isn’t even anything left to say anymore. There is no more raising awareness. Everyone is aware,” tweeted comedian and actress Ashley Nicole Black. “We simply live in a country that refuses to stop killing its citizens. RIP Duante Wright, and prayers up for all who knew him.”