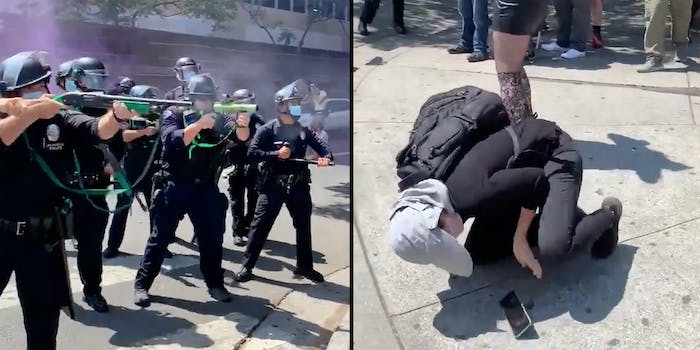 The protest was in response to a viral video of a transphobic rant.

A viral video shows a Los Angeles police officer shooting a woman at close range with a rubber bullet as she begged police to put their guns down. The incident took place during a counterprotest to an anti-transgender rally near a trans-inclusive spa.

Multiple reports say dozens were arrested amid the conflict that was marked with police in riot gear using non-lethal weapons, including rubber bullets, against pro-LGBTQ protesters. The video of the shooting was posted to Reddit on Sunday by user u/waterspider__, who filmed much of the counterprotest in Koreatown.

The video shows a line of officers in the street surrounding counterprotesters on a sidewalk. “Don’t shoot!” protesters yell, holding their hands up. An officer aims and fires at a woman who immediately clutches her stomach and falls to the ground.

Anti-transgender protesters gathered on Saturday near Wi Spa, a Koreatown business with a trans-inclusive policy. The spa is in the crosshairs of right-wing media after a video showed an upset client confronting employees because a trans woman used the women’s locker room. “There’s no such thing as transgender,” the woman says.

Per the Guardian, the video garnered more attention after Tucker Carlson shared it on his Fox News show. Far-right protesters called for a boycott of the spa and made unfounded assertions about pedophilia and the necessity to “protect female spaces,” suggesting Wi Spa’s inclusive policy harms cisgender women. At least 38 people were arrested during Saturday’s protests.

The Daily Dot has reached out to the Los Angeles Police Department and the original poster of the shooting video for comment.