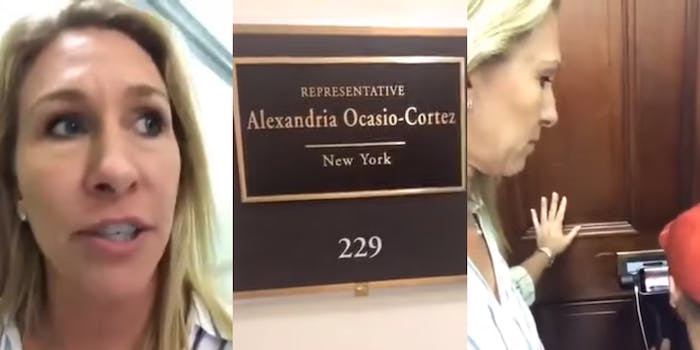 The footage comes after AOC was confronted yet again this week by MTG.

Prior to being elected to public office, Rep. Marjorie Taylor Greene (R-G.A.) was filmed harassing Rep. Alexandria Ocasio-Cortez’s (D-N.Y.) office during a 2019 visit to the U.S. Capitol.

The footage, which was later deleted after being uploaded to Greene’s Facebook page, showed the woman shouting through a mailbox slot on the locked door of Ocasio-Cortez’s office.

While standing next to a man who would later be arrested for his involvement in the Jan. 6 riot at the Capitol, Greene—known best for her belief in the QAnon conspiracy theory—can be heard calling the congresswoman “nutty” and “crazy eyes” while walking towards her office.

After arriving, Greene continues her rant while demanding to be let into Cortez’s office.

“Alexandria Ocasio-Cortez, I’m an American citizen,” Greene shouts through the door. “I pay your salary through the taxes that you collect for me through the IRS because I’m a taxpaying citizen of the United States.”

Greene goes on to demand that Ocasio-Cortez get rid of her “diaper” and step outside of the locked office.

Originally filmed on Feb, 22, 2019, the footage was recently obtained and shared exclusively by CNN. On that same day, Greene visited the office’s of numerous other Democrats and accused them of “treason.”

The video’s release comes as Greene has stirred controversy yet again for confronting Ocasio-Cortez outside the House chamber on Wednesday.

In remarks to the media on Friday, Ocasio-Cortez responded to the ongoing harassment by suggesting that Greene is “deeply unwell.”

“This is a woman that’s deeply unwell and clearly needs some help and her kind of fixation has lasted for several years now,” the congresswoman said. “At this point I think the depth of that unwellness has raised concerns for other members as well…”