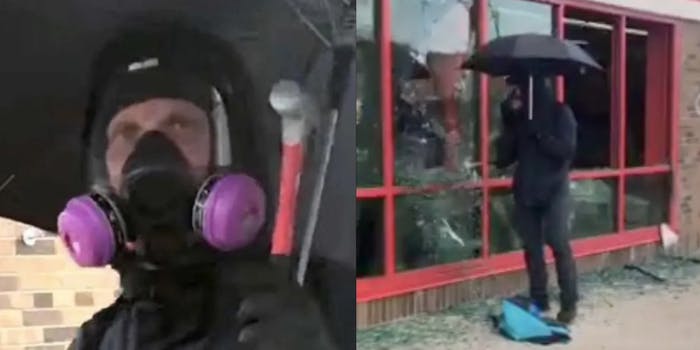 Police say the man is a suspected member of the Hell's Angels biker gang.

Police say a man who went viral for vandalizing an auto parts store in Minneapolis during the George Floyd protests is a suspected white supremacist.

The individual, who came to be known as “Umbrella Man,” stirred controversy at the time after breaking out windows at an AutoZone. The man also spray painted the phrase “Free Shit For Everyone” on the wall of the business.

The mysterious figure prompted countless people online to claim that the man was attempting to stir up violence and may even be an undercover police officer.

While the man may not have been a cop, concerns about attempts to create chaos appear to have been well founded.

As reported by the StarTribune Tuesday, police have identified the man as a member of the Hell’s Angels biker gang as well as the prison and street gang the Aryan Cowboy Brotherhood.

A search warrant affidavit filed in court this week blames the man for sparking the unrest that ultimately led to widespread looting and arson.

“This was the first fire that set off a string of fires and looting throughout the precinct and the rest of the city,” Minneapolis police arson investigaor Erika Christensen wrote. “Until the actions of the person your affiant has been calling ‘Umbrella man,’ the protests had been relatively peaceful. The actions of this person created an atmosphere of hostility and tension. Your affiant believes that this individual’s sole aim was to incite violence.”

Christensen further stated that despite scouring hours-worth of videos on social media, the discovery of the man’s identity ultimately came after an email tip.

The affidavit also adds that the man “wanted to sow discord and racial unrest by breaking out the windows and writing what he did on the double red doors.”

The man in question has not been formally charged with any crimes at this time.