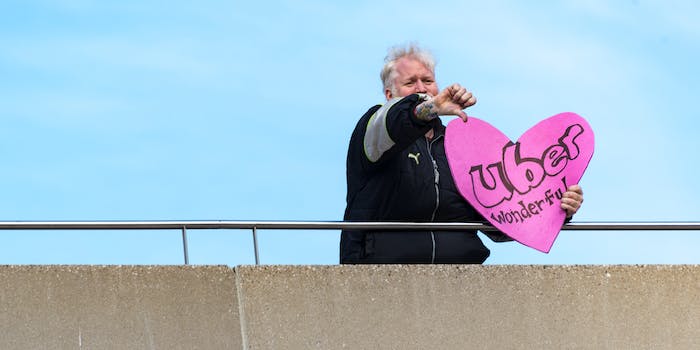 The ride-hailing giant is crumbling under the weight of controversy.

After just six months, the president of Uber, Jeff Jones, is leaving the company. Uber did not provide a specific reason for his departure, simply stating, “We want to thank Jeff for his six months at the company and wish him all the best.”

Jones hinted that his exit may have to do with the multiple controversies surrounding the company. In a statement to Recode, he said, “It is now clear, however, that the beliefs and approach to leadership that have guided my career are inconsistent with what I saw and experienced at Uber, and I can no longer continue as president of the ride-sharing business.”

His resignation may also have been spurred by CEO Travis Kalanick’s announcement that he was looking for a new chief operating officer to help turn things around. The company made headlines when it hired Jones, a well-regarded chief marketing officer at Target, last August. He took charge of the ride-hailing giant’s branding, customer support, and operations.

Uber has been embroiled in a litany of controversies over the past several months. This latest round started when it was accused of undermining a strike by taxi drivers against President Donald Trump’s refugee ban by suspending surge pricing at the time. This, along with Kalanick’s ties to Trump, led to the #DeleteUber campaign and the deletion of more than 200,000 Uber accounts. That was followed by a blog post by an ex-employee at Uber who wrote of sexual harassment and backstabbing in the workplace. Then Kalanick was caught on video verbally abusing one of his drivers.

All of these events likely helped instigate an exodus of upper-management. Along with Jones, Brian McClendon, vice president of maps and business platform, and Raffi Krikorian, a director in Uber’s self-driving division, also resigned. And Amit Singhal, an engineer at Uber, was told to leave after failing to disclose sexual harassment claims against him at his previous employer, Google.

Kalanick admitted to needing leadership help after the video leaked of him berating one of his drivers. That sentiment no longer seems like an initiative, but a necessity.