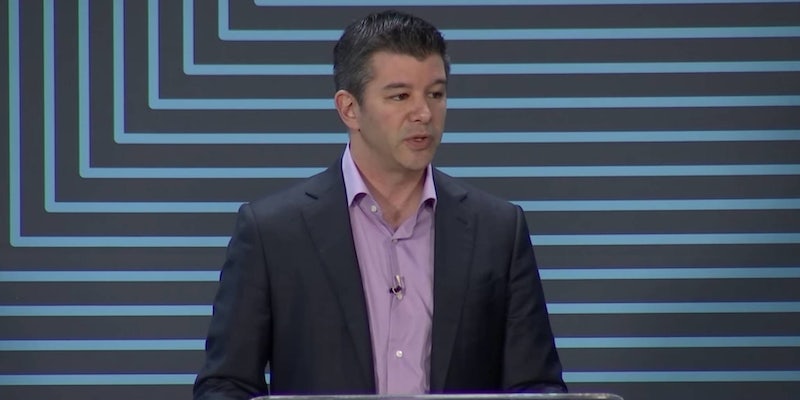 Uber is being called a scab.

After President Donald Trump signed an executive order barring Syrian refugees and the citizens of six other Muslim-majority nations from entering the U.S., it fueled spontaneous and massive protests at airports across the country, the biggest and most high-profile of which took place at JFK International Airport in New York.

The situation spurred a number of public-facing reactions from major companies. Airbnb CEO Brian Chesky promised to provide free housing for “refugees and anyone not allowed in the U.S.” Facebook CEO Mark Zuckerberg wrote a post criticizing the decision, albeit an anodyne one. And Twitter’s official account sent out the following: “Twitter is built by immigrants of all religions. We stand for and with them, always.“

But one company clearly pursued the wrong course of action in responding to the fracas, and that was Uber. Amid the protests at JFK, New York City taxi drivers declared a strike, refusing to service the airport for a full hour as a show of solidarity against Trump’s executive order.

But while the call was heeded by the city’s licensed taxi cabs, it wasn’t by their chief competitors in the world of tech—Uber tweeted that they had suspended surge pricing to JFK, spurring outcry that they were breaking the drivers’ strike.

On Uber scabbing cabbies at JFK: "one person’s inhumane, cruel, and unconstitutional act of pure bigotry is another person’s opportunity" https://t.co/MphC9OiL7q

Delete @Uber. Not just the app. Your account. It's easy. Do it now.

The criticism quickly boiled over into a full-blown movement to boycott Uber, to both delete its app and as many accounts as possible. When someone decides to ditch Uber, the details field on the company’s account deletion page provides a prime opportunity to say precisely why the plug is being pulled.

Forgot to screenshot my reasons to #deleteuber but my girlfriend @mslizot shut these scabs the hell down (attn: @Bro_Pair and @uber) pic.twitter.com/2XrakYuvZW

#deleteUBER. They've always been evil. Remember price spiking during Paris terrorist attacks? I do. I was trapped in the middle of it.

Lyft better navigated the politics of the moment, but nonetheless, it reportedly committed the exact same offense against the picket line that Uber did. According to Washington Post transportation reporter Faiz Siddiqui, a spokesperson for the company confirmed that it also had drivers servicing JFK during the taxi strike with surge pricing turned off.

Lyft continued to serve JFK during strike as well, but it turned off surge pricing, a spokeswoman tells me. https://t.co/2NGVnmizfq

The reason this has drawn less attention and outrage, in all likelihood, lies in Uber CEO Travis Kalanick’s position as a business adviser to Trump, as well as Lyft’s announcement that it’ll be donating $1 million to the American Civil Liberties Union (ACLU) during the next four years. The company’s co-founders John Zimmer and Logan Green announced the decision in an email and statement the day after the order was signed.

We created Lyft to be a model for the type of community we want our world to be: diverse, inclusive, and safe.

This weekend, Trump closed the country’s borders to refugees, immigrants, and even documented residents from around the world based on their country of origin. Banning people of a particular faith or creed, race or identity, sexuality or ethnicity, from entering the U.S. is antithetical to both Lyft’s and our nation’s core values. We stand firmly against these actions, and will not be silent on issues that threaten the values of our community.

We know this directly impacts many of our community members, their families, and friends. We stand with you, and are donating $1,000,000 over the next four years to the ACLU to defend our constitution. We ask that you continue to be there for each other – and together, continue proving the power of community.

Uber has stated that it intends to compensate for up to three months any of its drivers who were outside the U.S. when the ban was imposed and now can’t return. Kalanick also criticized Trump’s executive order, and said he’d raise the issue with the president during his first White House meeting.