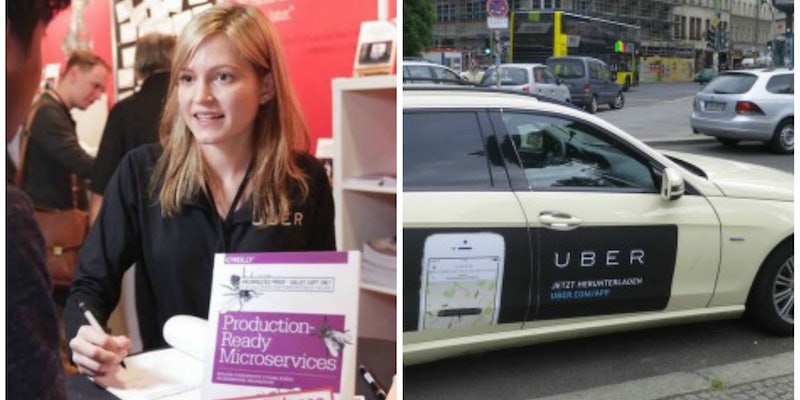 She says the company's culture has led to many women exiting.

When Susan Fowler was hired by Uber in November 2015, she figured it was a great time to join the ride-sharing service as a site reliability engineer. But early in her tenure, Fowler began to realize Uber engaged in a coverup culture of sexual harassment that has driven women engineers away from the company.

As she writes in a post on her website, Fowler, on her first day with her new team, was besieged by sexually harassing messages from her manager that the company basically ignored. She also wrote of a company culture besieged by in-fighting, unchecked backstabbing, and the lack of desire to investigate claims of sexual harassment. On Sunday, Uber CEO Travis Kalanick said he would open an investigation into Fowler’s claims.

Fowler’s feeling began soon after she was hired. Fowler wrote that on her first official day on her new team, her manager sent a number of direct messages to her in the company chat service and said “he was looking for women to have sex with. It was clear that he was trying to get me to have sex with him.”

Fowler wrote she took screenshots of the messages and sent them to the HR department, but she was told that since it was the man’s first offense and because he had good performance reviews from his bosses, he would only receive a warning and a “stern talking-to.”

Then, HR gave her an option. Wrote Fowler:

I was then told that I had to make a choice: (i) I could either go and find another team and then never have to interact with this man again, or (ii) I could stay on the team, but I would have to understand that he would most likely give me a poor performance review when review time came around, and there was nothing they could do about that. I remarked that this didn’t seem like much of a choice, and that I wanted to stay on the team because I had significant expertise in the exact project that the team was struggling to complete (it was genuinely in the company’s best interest to have me on that team), but they told me the same thing again and again. One HR rep even explicitly told me that it wouldn’t be retaliation if I received a negative review later because I had been “given an option.”

She eventually left the team and found more happiness in another department, but Fowler also wrote that she met other women engineers who had the same problem with the same man who had originally harassed her. Fowler said that HR continued to insist he had only one offense.

“Myself and a few of the women who had reported him in the past decided to all schedule meetings with HR to insist that something be done,” Fowler wrote. “In my meeting, the rep I spoke with told me that he had never been reported before, he had only ever committed one offense (in his chats with me), and that none of the other women who they met with had anything bad to say about him, so no further action could or would be taken. It was such a blatant lie that there was really nothing I could do. There was nothing any of us could do. We all gave up on Uber HR and our managers after that.”

Fowler said she was blocked from transferring to another department because even though she said she received a perfect performance score from her superiors, Uber executives said she had “undocumented performance problems.” She said they eventually admitted that “performance problems aren’t always something that has to do with work, but sometimes can be about things outside of work or your personal life.”

She wrote that she continued to be undercut by her managers and faced more harassment as the company’s female engineers began to dwindle. She described a political structure similar to what you’d find in Game of Thrones, with upper management sabotaging each other to get the upper hand.

“I also remember a very disturbing team meeting in which one of the directors boasted to our team that he had withheld business-critical information from one of the executives so that he could curry favor with one of the other executives (and, he told us with a smile on his face, it worked!). The ramifications of these political games were significant: projects were abandoned left and right, OKRs were changed multiple times each quarter, nobody knew what our organizational priorities would be one day to the next, and very little ever got done.”

Eventually, she left the company for Stripe but not before doing some math. When Fowler first joined Uber, she said women made up more than 25 percent of the organization. “On my last day at Uber, I calculated the percentage of women who were still in the org,” she wrote. “Out of over 150 engineers in the [site reliability engineer] teams, only 3 percent were women.”

This isn’t the first time Uber has faced problems like this with drivers trying to fondle customers, drivers engaging in homophobia, and executives threatening to smear journalists.

In response to Fowler’s post, Kalanick wrote he has instructed the chief officer of human resources to conduct an urgent investigation.

“I have just read Susan Fowler’s blog,” Kalanick said in a statement to the Verge. “What she describes is abhorrent and against everything Uber stands for and believes in. It’s the first time this has come to my attention … We seek to make Uber a just workplace and there can be absolutely no place for this kind of behavior at Uber—and anyone who behaves this way or thinks this is OK will be fired.”