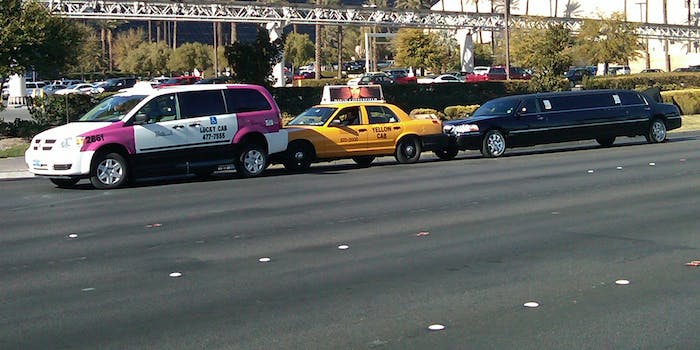 CNN has provided a peak under the hood of the dog-eat-dog world of taxi start-ups.

Employees of taxi-contracting company Uber are engaged in a covert campaign to disrupt rivals’ services with fake bookings and aggressive eulogising, according to technology transport company Lyft—a claim that Uber vehemently denies.

Lyft—a rideshare company in competition with Uber—provided CNN with data alleging that Uber staff have submitted 5,560 fake ride requests since last October, undermining the company’s ability to provide a taxi service to genuine customers, and—presumably—costing the company thousands in lost revenue from the no-shows. But Uber told the Daily Dot this is “patently false.”

Lyft made the claim to CNN that by checking the numbers of “known Uber recruiters” against those accounts that cancelled rides, they discovered more than 5,000 of these “phantom requests”—but as CNN points out, “there was nothing to suggest that Uber’s corporate office commissioned the canceled rides or even that they were aware of them.”

These 5,560 fake rides apparently come from 177 Uber employees from across the United States, with one Uber recruiter allegedly behind 680 cancellations from more than a dozen different accounts. Some Lyft drivers also report being subjected to pro-Uber eulogising on the rare occasions that the riders do not cancel.

In a statement, Lyft said that “it’s unfortunate for affected community members that they have used these tactics, as it wastes a driver’s time and impacts the next passenger waiting for that driver.”

However, Uber disputes Lyft’s findings, and a spokesperson gave the Daily Dot the following statement: “We recently ran a program where thousands of riders recruited drivers from other platforms, earning hundreds of dollars in Uber credits for each driver who tries Uber. Even Lyft drivers have participated in a succesful campaign recruiting thousands of other Lyft drivers to Uber.”

“Taking the ride and meeting the driver is essential to succesful recruitment,” Uber adds.

But If the data that Lyft has provided is accurate, then it’s a dirty trick: one that not only harms the company but also the livelihoods of the drivers in question, forcing them to burn fuel driving to unpaid no-shows, and missing the opportunity to courier paying customers in the process.

And it’s not the first time.

Back in January, CNN reported on an Uber rival calling foul as they were subjected to more than 100 cancellations from Uber employees over the space of just three days. In response, Uber said that “Our local teams can be pretty determined when spreading the word about Uber and how our platform opens up new economic opportunities for drivers… In this instance, the New York City team was a bit too ambitious and we’ll make sure they tone down their sales tactics.”

“Ambitious” is a strange way to describe deliberate attempts to degrade a competitor’s service through deceit, but at least in this instance Uber acknowledged there was a problem. When the taxi company was previously criticised after a customer was choked by her driver in an apparent racist attack, CEO Travis Kalanick sent an internal email attacking the media for believing Uber is “somehow liable for these incidents that aren’t even real in the first place.”

Driver misbehavior is a recurring headache for the company, with numerous reported incidences of sexual assaults, hit-and-runs, failed background checks—and, most recently, the kidnapping of a tech CEO in a “high speed car chase across state lines with police.”

CNN also reports that in an attempt to keep hold of its drivers, Uber sent texts to its drivers in New York last month informing them that city regulations forbid them simultaneously working for other companies—such as Lyft. This is false, as confirmed by the NYC Taxi and Limosine Commission, and Uber later retracted the comments.