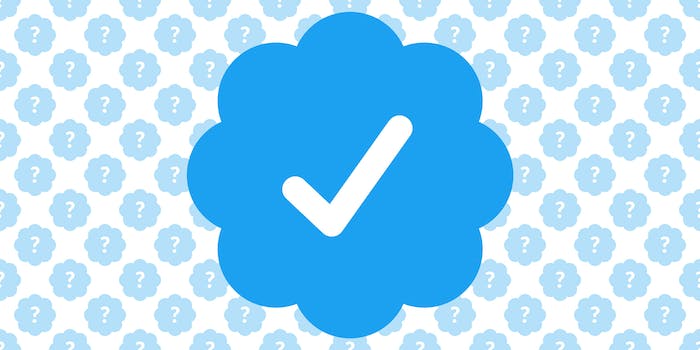 Verified Twitter users only receive a slap on the wrist for breaking the rules.

Twitter updated its verification guidelines on Wednesday for accounts “of public interest.” The change is designed to make verified account owners (those with that little blue checkmark next to their names) more accountable for what they tweet on the service. But the changes don’t go far enough in ensuring influential account holders don’t abuse their position.

The problem began—at least in Twitter’s eyes—last July, when it allowed anyone to apply for a verified badge. Twitter failed to acknowledge that verification had become a means of endorsement on the site. (It originally began as more of a means to authenticate an account and distinguish it from copycats or parodies, but it became a symbol of elevated status.) Twitter realized it had a serious issue after getting criticism for verifying the account of the white nationalist Charlottesville rally organizer earlier this year. In response, Twitter halted its verification process last week, and this week, announced a set of new guidelines for verified users.

Now, Twitter says it “reserves the right to remove verification at any time without notice.” It can remove your verified status if you have a misleading name or bio, for promoting hate or violence, engaging in harassment, or violating Twitter’s other rules. Thus far, it’s removed verification from a handful of mostly white-nationalist and alt-right accounts, including Richard Spencer, Jason Kessler, Laura Loomer, and blogger @APurposefulWife.

This punishment is actually less severe than for those without a verified account. For the average Twitter users who violate Twitter’s rules, the company may: require you to delete a post before you can interact on the app again; temporarily limit your ability to create posts or chat with other Twitter users; request you verify account authenticity; or permanently suspend your account(s).

So, if a verified Twitter user starts shaming and harassing a follower for sharing a contrary point of view, for example, they may only use lose their Twitter verified status as a consequence. This isn’t even a Band-Aid solution for Twitter’s harassment and verification problems—it’s not a solution at all. While Twitter does seem to be banning some users (such as alt-right figure Tim Gionet, AKA Baked Alaska), if history is any indication, Twitter’s unlikely to even enforce this policy in a regular and meaningful way.

For example, President Donald Trump‘s Twitter behavior repeatedly and regularly violates Twitter’s guidelines. In August, he threatened North Korea about nuclear war, with no repercussion. And in July, the president promoted violence—specifically against CNN and CNN staff—in a bizarre series of tweets.

Similarly, white supremacist leader Richard Spencer continues to have a presence on Twitter—even after being temporarily banned, and now having his verified status revoked. White supremacy is inherently antithetical to a peaceful, harassment-free Twitter. (The figurehead is also currently raising funds on a “free speech”-promoting site called Hatreon.) Former KKK grand wizard David Duke, who regularly tweets anti-Semitic content, is another individual who consistently violates Twitter’s terms, yet Twitter (for the most part) turns its head the other way.

If Twitter wants verified users (or any user, for that matter) to take its stance against violence and harassment seriously—and the role verified users play in following these rules—it needs to take serious action against those who repeatedly and flagrantly violate its policies.

There’s a trope that Silicon Valley startups always want to “change the world.” Social media giants like Twitter and Facebook have. As evidenced by Russian interference in last year’s election, and growing realizations that countries and organizations are using social media to meddle in politics across the globe, a tweet, an ad, or a trending topic can have lasting repercussions not just for a single person or a single country, but the entire world. Twitter’s changes to its verification guidelines show that it still does not understand or respect that fact.

With its new guidelines, Twitter is sending the wrong message. It’s saying that when you mislead or harm other users, that wrong is only worthy of losing a shiny badge next to your name. Twitter needs to take its place in modern politics, economics, and communication seriously. Tweets, whether we like it or not, have serious repercussions on the greater world around us. Verified users who abuse their platform need to be barred from tweeting or suspended from the app entirely.