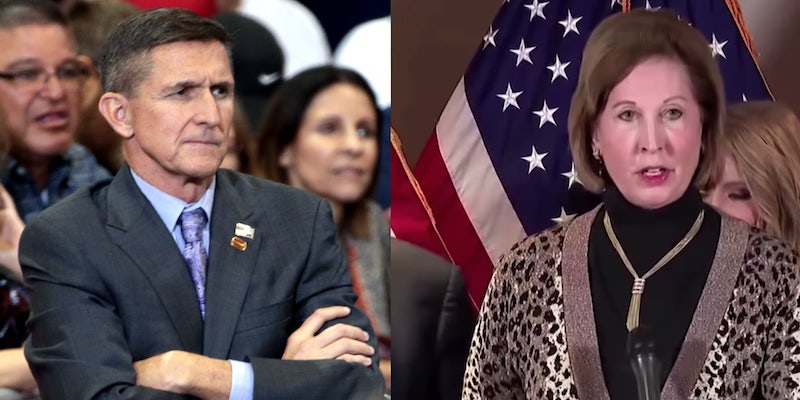 Twitter carried out a major crackdown against the QAnon conspiracy theory on Friday by banning its most prominent advocates.

In a statement to NBC News, Twitter said that the accounts in question had violated the platform’s “Coordinated Harmful Activity” policy. The move comes after Trump supporters swarmed the U.S. Capitol.

“We’ve been clear that we will take strong enforcement action on behavior that has the potential to lead to offline harm, and given the renewed potential for violence surrounding this type of behavior in the coming days, we will permanently suspend accounts that are solely dedicated to sharing QAnon content,” a Twitter spokesperson reportedly said.

Those removed by Twitter include attorney Sidney Powell, who was also hit today with a $1.3 billion lawsuit by election technology company Dominion Voting System for spreading debunked claims of widespread voter fraud.

Michael T. Flynn, the former national security advisor to President Donald Trump, also had his account purged after months of promoting the conspiracy. QAnon believers have been convinced that the president is locked in a secret battle with a global cabal of child-eating pedophiles compromised of Democrats and Hollywood.

Ron Watkins, the former administrator of the far-right forums 8chan and 8kun where the Q conspiracy first began, was also booted from the platform. Watkins had not only promoted debunked claims regarding voter fraud, which resulted in election workers being forced into hiding, but also encouraged Trump supporters to attend the riot on Wednesday in Washington, D.C. that led to five deaths. Ron Watkins’ father, Jim Watkins, was also reportedly banned.

Other prominent QAnon adherents including “Praying Medic” and “Major Patriot” were banned as well.

The wave of bans comes just days after Trump supporters stormed the Capitol in an attempt to stop the Electoral College vote. A popular part of the QAnon conspiracy was the belief that the election would be overturned on Wednesday, allowing the president to serve a second term.

Aside from the digital realm, QAnon supporters are also facing problems in the real-world as law enforcement carries out arrests across the country of those who participated in the Capitol riot.