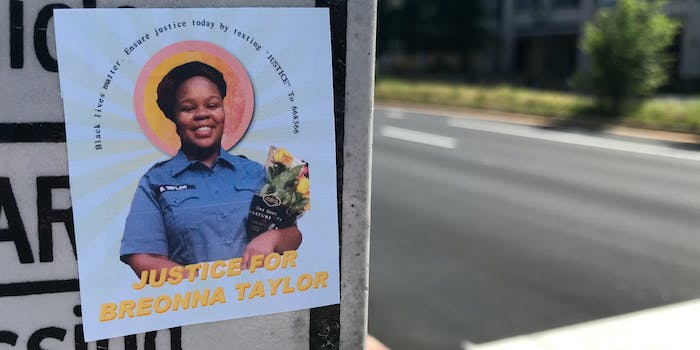 'My account was compromised because I spoke out about Breonna Taylor.'

A significant number of Twitter users were locked out of their accounts on Wednesday, leading many to believe the platform was censoring those discussing Breonna Taylor.

While much of the internet reacted with outrage to the minor charges against only one of three officers involved in the death of Taylor, who was shot and killed in her bed last March as police executed a late-night search warrant, users began reporting having their accounts locked down.

Many began connecting the two incidents, arguing that Twitter was clearly attempting to stifle the backlash online.

“Twitter is censoring my tweets about Breonna Taylor,” @TravisAllen02 tweeted. “If you can see this, please retweet and like. SAY HER NAME!”

Aside from having access to their accounts limited, numerous other users reported either missing tweets or lost followers.

“Wow, a big time follower drop seconds after retweeting on Breonna Taylor,” @jules_ba5ak alleged. “Either Twitter’s purging something or good riddance to those showing their true colors.”

The issue regarding limited accounts appears to have affected a wide range of users, not just those discussing Taylor.

One account, @Goldeneye1971, for example, complained of the issue but had not tweeted about anything related to Wednesday’s verdict.

Twitter responded to the complaints by refuting the issue was related to what users had recently tweeted.

“We’re seeing a number of accounts that have been locked or limited by mistake and not because they Tweeted about any particular topic,” the Twitter Support account said. “We’re working to undo this and get those accounts back to normal.”

Several hours later, Twitter issued an apology and stated that the affected accounts had been successfully restored.

“The accounts that were mistakenly locked or limited have been restored,” the company said. “We’re sorry this happened in the first place.”

Twitter also weighed in on the issue surrounding follower counts, noting that the problem would soon be remedied as well.

While the issue should be fixed, it remains unclear what caused the issue to begin with. Twitter has not provided details on the specifics of the problem.

Many users still don’t think it’s a coincidence the accounts were locked or limited by mistake.