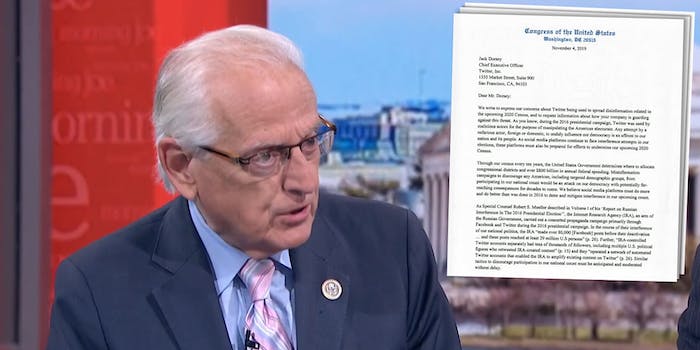 The lawmakers want answers from the social media company.

A group of House of Representatives members are asking Twitter how it plans on handling potential misinformation being spread on its platform during the 2020 Census.

The group of lawmakers, which includes 58 Democrats, sent a letter to Twitter CEO Jack Dorsey on Monday. Within it, they request “information about how your company is guarding” against the “threat” of Census misinformation.

“As you know, during the 2016 presidential campaign, Twitter was used by malicious actors for the purpose of manipulating the American electorate. Any attempt by a nefarious actor, foreign or domestic, to unduly influence our democracy is an affront to our nation and its people,” the letter reads. “As social media platforms continue to face interference attempts in our elections, these platforms must also be prepared for efforts to undermine our upcoming 2020 Census.”

The letter adds that misinformation surrounding the Census to discourage people from participating would be an “attack on our democracy with potentially far-reaching consequences for decades to come.”

Over the summer, Facebook announced that it intended to treat the 2020 Census “like an election” and that it would work to “prohibit misrepresentations of census requirements, methods, or logistics, and census-related misinformation.”

You can read all of the letter from the Democrats to Dorsey here.

Update 10:04am CT: A Twitter spokesperson told the Daily Dot that the company is looking into the “best ways to support a successful 2020 Census.”

We’ve been involved in conversations regarding the upcoming U.S. Census and joined Census Bureau representatives in workshops and meetings to discuss the best ways to support a successful 2020 Census,” a Twitter spokesperson told the Daily Dot on Tuesday.