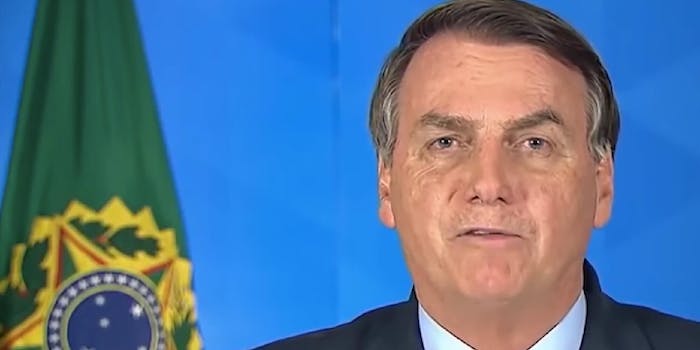 Latin American journalists and media experts are saying that the tweets contained incorrect information about the coronavirus.

The founder and director of the Knight Center for Journalism in the Americas Rosental Alves wrote that the tweets contained videos of the president in a crowded market as he campaigned against social distancing.

“In the posts, the president of Brazil was campaigning in a popular market against the social isolation and spreading false info about a medicine,” Alves wrote on Twitter.

In a recent televised statement, the Brazilian president minimized the coronavirus, saying that people like him with an “athletic history” shouldn’t be worried at all.

The Brazilian president wasn’t the only Latin American politician whose tweets were taken down for false coronavirus information, according to Alves. Apparently, Twitter deleted a tweet from Venezuelan politician Nicolas Maduro as well.

Misinformation is rampant in the times of the coronavirus pandemic, but health professionals are recommending social distancing, despite many politicians downplaying the importance of the measures.

As the number of coronavirus cases and deaths climb, it’s crucial to follow instructions from international health organizations in order to protect at-risk communities, like the elderly.

In October, Twitter announced that politicians were “not above” the company’s community guidelines. That means something that wouldn’t fly for a private citizen to tweet, likely won’t be allowed for a world leader either.

The Daily Dot did not receive a response from Twitter by publication time.

Update 11:06am CT, March 30: Twitter confirmed that it removed the tweets, as a spokesperson tells the Daily Dot: “Twitter recently announced the expansion of its rules to cover content that could be against public health information provided by official sources and could put people at greater risk of transmitting COVID-19. Details of our approach are available in this post on our blog.”

The reporter has written for the Knight Center for Journalism in the Americas.