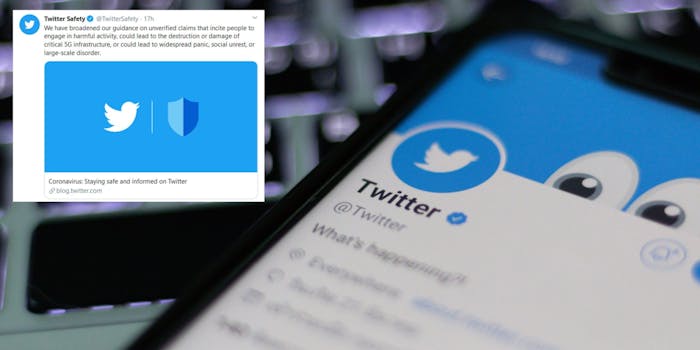 Tweets that 'incite people to engage in harmful activity' will be removed.

Twitter is cracking down on tweets about the coronavirus pandemic that could “incite people to engage in harmful activity” or could lead to the destruction of 5G towers, the company announced.

In an update to its coronavirus policies, Twitter announced on Wednesday that it would remove misinformation tweets surrounding 5G and the coronavirus, stemming from a conspiracy theory that the new cellphone technology and the frequency it uses causes the same symptoms as coronavirus.

It gained steam online and some cell towers were burned in the United Kingdom.

“We have broadened our guidance on unverified claims that incite people to engage in harmful activity, could lead to the destruction or damage of critical 5G infrastructure, or could lead to widespread panic, social unrest, or large-scale disorder,” the company’s safety Twitter account posted on Wednesday.

Twitter added that since March 18 it has removed 2,230 tweets containing “misleading and potentially harmful content” and it flagged more than 3.4 million accounts that had “manipulative discussions” about the pandemic.

In early April, several cell towers were torched in the United Kingdom around the time that a conspiracy theory linking the coronavirus and 5G technology began to spread.

Earlier this month, Facebook reportedly took down two anti-5G groups after users within them encouraged the destruction of phone masts. The groups had more than 65,000 members between them, according to Business Insider.