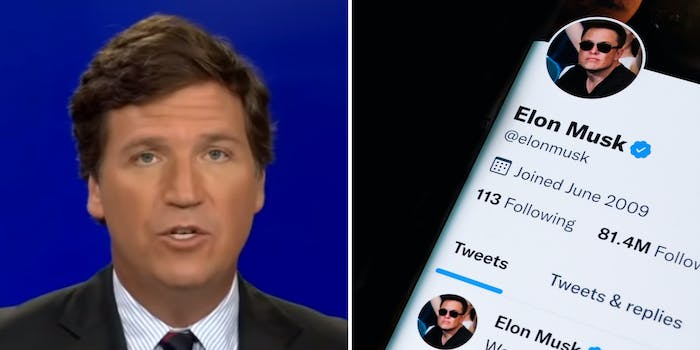 Elon Musk is officially planning to buy Twitter and take it private. Many believe that Musk will restore banned accounts and loosen Twitter’s community guidelines. These suspicions are further fueled by Musk’s statement about the purchase referencing the importance of “free speech” and calling Twitter “the digital town square.”

Tucker Carlson used Musk’s deal to buy Twitter as cover to return to the platform. Twitter temporarily suspended Carlson in March for misgendering the Assistant Secretary of Health and Human Services Rachel Levine, which violates its rules. (Levine is transgender.)

On Monday, after news broke that Musk and Twitter had reached a $44 billion buyout deal, Carlson staged a triumphant return.

Though the Fox News host didn’t say so, many assumed that Musk had something to do with restoring Carlson’s account.

“It seems like freedom of speech is having one of its better days…” @saylor commented on Carlson’s tweet.

The Daily Mail reported that Carlson’s account was “reinstated just hours after Elon Musk purchased the platform.” The New York Daily News also reported that he’d been “reinstated”—though it also referred to Carlson as “the lie-spewing host.”

In spite of what many believe, Carlson’s return to Twitter doesn’t appear to have anything to do with Musk’s changing a policy. He simply seems to have deleted the tweet that violated Twitter’s policies, thus restoring his access.

“Tucker Carlson’s social media team is implying that this has something to do with Elon Musk’s takeover of Twitter but actually it’s that they just deleted the tweet for which they were suspended, which misgendered Admiral Rachel Levine,” Drennen tweeted, along with a link to Carlson’s deleted tweet.

“The return of some of these suspended accounts really shows that they could have simply decided to no longer be suspended, but decided to wait until now to delete the tweet that got them locked in the first place,” @ParkerMolloy said. “It’s all performative nonsense.”

It also bears mention that as of Tuesday morning, others who were suspended for misgendering Admiral Levine, such as Charlie Kirk and the satirical site the Babylon Bee, hadn’t started tweeting again.

As some have noted, Musk isn’t running Twitter yet, as the purchase hasn’t been finalized. Further, provided the deal goes through, it remains to be seen whether and how much Twitter will change under him.

People are already testing the limits, such as by tweeting false information about the efficacy of ivermectin treating COVID-19 and flouting their previous suspensions by rejoining the platform.

Tucker Carlson isn’t one of them.