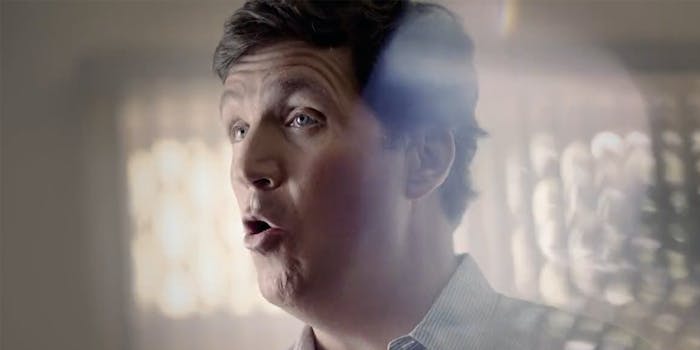 Video claims Jan. 6 may have been a 'false flag' and domestic terrorists are patriots.

On Wednesday, Tucker Carlson released the trailer for a video that promises to tell the “true story behind” the Capitol riot.

In less than 24 hours, the trailer has been watched more than 1 million times on Twitter. Virality often indicates popularity, but in this case, it’s quite the opposite.

Carlson’s video is being resoundingly panned as an attempt to rewrite history. Much of the commentary accuses Carlson of intentionally distorting what really happened on Jan. 6, when a mob attempted to overturn the election results in favor of former President Donald Trump.

The trailer’s overall thrust is that alleged Capitol rioters are being unjustly persecuted. It puts forth several false claims, such as Jan. 6 may have been a “false flag,” that Americans are being imprisoned in Guantanamo Bay, and leftists are hunting down conservatives. Many viewers feel that it also suggests that white nationalists aren’t a genuine threat to the country.

The video splices clips of interviews with Carlson, Stop the Steal organizer Ali Alexander, and others, with footage of President Joe Biden, Osama bin Laden, the Ku Klux Klan, war scenes, waterboarding, and the riot itself.

Carlson’s trailer begins by arguing that prosecuting alleged domestic terrorists amounts to a “plot against the people,” which it refers to as a “patriot purge.”

“The domestic war on terror is here and it’s coming after half of the country,” it warns.

“The left is hunting the right. Sticking them in Guantanamo Bay for American citizens. Leaving them there to rot.”

“I’ve been told that I’m a white nationalist,” Alexander says incredulously. “Me.”

Carlson and powerful Republicans have spent months downplaying the violence and intent of the crowd that ransacked the Capitol while Congress was poised to certify the 2020 election. This video is clearly a continuation of that effort.

Reactions to the trailer have been overwhelmingly negative. “The revising of history has begun…” opined one Twitter user. Another take was that Carlson “is trying to say a war on White Supremacy is a bad thing.”

Joe Walsh challenged Fox News personalities to “have the courage or the decency to condemn this.” Walsh called out several by name, including Bret Baier, Brit Hume, and Chris Wallace. Others echoed Walsh’s point.

Many posted videos from the riot in which police officers are beaten and attacked.

Carlson did have a few defenders. “Going to be epic,” tweeted a reporter at right-wing news outlet the Blaze.

The full video is scheduled to be released on Monday.